Lucy would do anything for her mom…but she never expected to end up promising to leave her.

After her mom got sick, Lucy dropped everything to take care of her, working all hours in a greasy diner just to make ends meet and spending every spare moments she had by her mom’s hospital bedside.

Now, Lucy is faced with a whole year of living by her own rules, starting by taking the first bus out of town to anywhere…

Except she didn’t expect to find her next big adventure just around the corner! Especially when on her first day in town she bumps into grumpy, but oh-so-delicious Clay amidst the maple trees. Surrounded by the magic of Ashford, Lucy has the chance to change her life forever and finally discover a life she wants to live!

Secrets at Maple Syrup Farm, is all about Lucy, who after years of looking after her sick mum, makes the harrowing journey from her home in Detroit, to anywhere the first bus heading out of town is going.

She really doesn’t want to go, but her mum made her promise that she would have a year to herself, which included applying for a scholarship at the ‘Da Vinci Institute’ in Paris, to follow her dream of becoming an artist.

Lucy’s bus takes her to the little village of Ashford, the home of ‘The Gingerbread Café’, from Rebecca’s previous books.

Can Lucy truly be happy in Ashford, especially when she misses her mum so much?

The story starts off quite serious and emotional and you feel Lucy’s pain at what her mum is asking her to do, but a promise is a promise and she knows that she can’t let her mum down.

When Lucy arrives in Ashford, and especially starts working at the farm, the book comes alive.

I love Lucy; She is a wonderful young woman who has had to deal with so much, with looking after her mum who has spent the last few years in and out of hospital, to working two jobs just to keep a roof over their heads.

She is a bold woman, with a wicked sense of humour and a strong determination, especially where Clay is concerned.

Clay on the other hand is a sexy, hot bloke, who’s also a bit of a loner and moody. His reactions to Lucy’s foot-in-mouth moments are comical and the pair really bounce off one another. I felt myself routing for them to finally get together.

The story goes back in time via old man Jessop’s journal, Clay’s uncle who originally owned the farm. Reading all about his love for the one woman who stole his heart, and how he never got over losing her was so sad, yet meaningful, and it teaches us how precious life is.

The attention to every last detail, especially how they collected the maple syrup, was beautifully written and I could imagine being in the field with those trees, smelling the country air and sitting watching the maple syrup dripping into the buckets. I wanted to taste their home grown syrup and keep some to spread it on my toast!

I have never read any of Rebecca Raisin’s books before, but after reading "Secrets at Maple Syrup Farm", I feel the need to, as I would love to know more about the characters that are in this book, and in Rebecca’s "The Gingerbread Café Trilogy", such as Ceecee, Lily and Sarah. That said, this book can be read as a stand alone.

I like the idea of having separate books that are interwoven and set in the same town. By writing the characters into numerous books we get to see how they have developed and grown throughout the years, thus making the books more interesting and giving the readers a connection to all the books.

The story is cleverly written with some amazing, caring and wonderful people, giving you the feeling of being part of the Ashford community. I would love to visit a place where all the town folk take care, help and look after one another.

An amazing, well-written book that had me attached to the pages and constantly engrossed in the plot. I hope to read more about Lucy and Clay in more books that Rebecca may write set in Ashford.

Secrets at Maple Syrup Farm, is a must read, especially for those that like their romantic books.

Rebecca Raisin is a true bibliophile. This love of books morphed into the desire to write them.

She’s been widely published in short story anthologies, and in fiction magazines. And now she is focusing on writing romance.

Rebecca aims to write characters you can see yourself being friends with. People with big hearts who care about relationships and believe in true love. 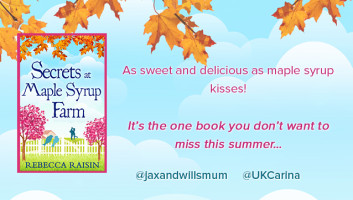 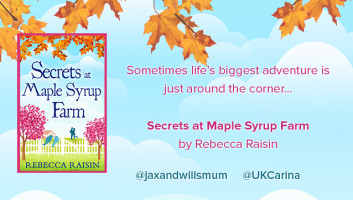