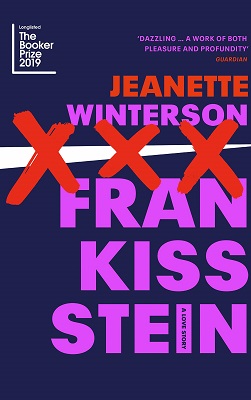 In Brexit Britain, a young transgender doctor called Ry is falling in love – against their better judgement – with Victor Stein, a celebrated professor leading the public debate around AI.

Across the Atlantic, in Phoenix, Arizona, a cryonics facility houses dozens of bodies of men and women who are medically and legally dead… but waiting to return to life.

But the scene is set in 1816, when nineteen-year-old Mary Shelley writes a story about creating a non-biological life-form. ‘Beware, for I am fearless and therefore powerful.’

What will happen when homo sapiens is no longer the smartest being on the planet? Jeanette Winterson shows us how much closer we are to that future than we realise. Funny and furious, bold and clear-sighted, Frankissstein is a love story about life itself.

The story begins in Lake Geneva 1816 where Mary Shelley, then just eighteen-years-old is holidaying with her husband Percy Bysshe Shelley and their friends Lord Byron, John Polidori, and half-sister Clair Clairmont. There is a tremendous storm and the friends are stuck inside for days on end. With nothing much to do except pass the time with stories and sex, Mary begins to pen her novel, Frankenstein.

We then move into the present with Doctor Ry Shelley who is Transgender/non-binary. Scientist Victor Stein, sex-mad/sexbot selling Ron Lord, Journalist Polly, and Evangelist Claire in a futuristic real-life Frankenstein moment with some sex dolls and stolen body parts amongst other mad moments.

This was a book I was hoping to love, unfortunately, I found Frankissstein heavy going. I was expecting a laugh-out-loud, humorous book but it felt like more like a piece of literary fiction and I struggled to find much humour in it. The funny sections that I did come across almost felt forced or that they were added just for laughs. I did find a few moments back in the 1816s with Shelley and her friends that gave me the odd giggle but this was the section that I had to concentrate on as apart from being the author Frankenstein I knew nothing of her life and the work is part fictionalised and part factual.

The plot is certainly different and unique. This felt like two books that had been combined to provide one novel. Whilst the historical element often had me having to focus I did enjoy these sections. Not something I would normally have chosen to read and did take me out of my comfort zone but they were surprisingly interesting and informative. The sci-fi/robotics/madness section just wasn’t to my liking and whilst I expected this to be the part of the book I enjoyed the most, it didn’t blow me away. I can understand the cross-over between the two sections but I’d rather have just read a book about Mary Shelley if I’m honest.

If you like books that are a little weird, step out from the norm and try to discover the meaning of life then this is a book you will enjoy, as long as you like a little bit of history to go with it.

Novelist Jeanette Winterson was born in Manchester, England in 1959. She was adopted and brought up in Accrington, Lancashire, in the north of England. Her strict Pentecostal Evangelist upbringing provides the background to her acclaimed first novel, Oranges Are Not the Only Fruit, published in 1985. She graduated from St Catherine’s College, Oxford, and moved to London where she worked as an assistant editor at Pandora Press.

One of the most original voices in British fiction to emerge during the 1980s, Winterson was named as one of the 20 “Best of Young British Writers” in a promotion run jointly between the literary magazine Granta and the Book Marketing Council.

She adapted Oranges Are Not the Only Fruit for BBC television in 1990 and also wrote “Great Moments in Aviation,” a television screenplay directed by Beeban Kidron for BBC2 in 1994. She is editor of a series of new editions of novels by Virginia Woolf published in the UK by Vintage. She is a regular contributor of reviews and articles to many newspapers and journals and has a regular column published in The Guardian. Her radio drama includes the play Text Message, broadcast by BBC Radio in November 2001.

Winterson lives in Gloucestershire and London. Her work is published in 28 countries.