Mark Spivak is an award-winning author, specializing in wine, spirits, food, restaurants, and culinary travel. He was the wine writer for the Palm Beach Post from 1994-1999, and was honored by the Academy of Wine Communications for excellence in wine coverage “in a graceful and approachable style.”

Since 2001 he has been the Wine and Spirits Editor for the Palm Beach Media Group, as well as the Food Editor for Palm Beach Illustrated; his running commentary on the world of food, wine and spirits is available at the Global Gourmet blog on www.palmbeachillustrated.com.

Spivak is the author of two non-fiction books: Iconic Spirits: An Intoxicating History (Lyons Press, 2012) and Moonshine Nation: The Art of Creating Cornbread in a Bottle (Lyons Press, 2014). Friend of the Devil is his first novel. He is currently working on a political thriller set during the invasion of Iraq.

What I Learned From My Hero and Villain

In Western culture, we tend to view things in black and white terms: right and wrong, good and evil, success or failure. Usually the truth lies somewhere in that grey area in between the extremes. This is an uncomfortable and sometimes painful thing to admit, which is probably why most of the major religions stress absolutes to their followers—those beliefs are reassuring.

In Friend of the Devil, I tried to explore some of those grey areas. On the one side we have Joseph Soderini di Avenzano, the famous chef who has cut a deal with the Devil for fame and fortune. On the other side is David Fox, the journalist writing about him, who is frequently depicted as being pure as the driven snow. Much of the plot consists of the interplay between those two very different concepts of the universe.

Those extremes are nonsense, of course. In real life, evil individuals are capable of saving puppies and virtuous people are more than capable of deceit. It takes a great deal of self-confidence to explore those contradictions, and for that reason the novel offers an engaging surface plot fun for those who don’t care to delve deeper. The truth is that David Fox has moments when he is seriously tempted to join Alessandra in her plot to murder the chef, and Joseph—demonically possessed or not—has a long history of random acts of kindness.

I’ve been asked several times if this was a difficult story to tell, and the answer is yes. There were moments when it took me to a very dark place. I carried the novel around in my head for many years before I even attempted a first draft, because there were issues I didn’t particularly care to confront. Eventually I came out on the other side, but it took quite a while and it was far from easy.

In talking to readers, one of the most interesting things that has surfaced is the question of whether Joseph actually consummated the pact with the Devil. Of course he did, because that transaction is depicted in considerable detail. But the story is told through David’s eyes, and David is unsure whether those events really took place; in fact, the novel ends with him still in the dark about the question. So when readers ask me that, I realize that they identified primarily with David and rejected the existence of overwhelming evil in the world—a reassuring indication about the truth of human nature, at least for most of us. 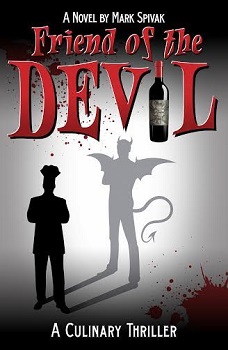 In 1990 some critics believe that America’s most celebrated chef, Joseph Soderini di Avenzano, sold his soul to the Devil to achieve culinary greatness. Whether he is actually Bocuse or Beelzebub, Avenzano is approaching the 25th anniversary of his glittering Palm Beach restaurant, Chateau de la Mer, patterned after the Michelin-starred palaces of Europe.

Journalist David Fox arrives in Palm Beach to interview the chef for a story on the restaurant’s silver jubilee. He quickly becomes involved with Chateau de la Mer’s hostess, unwittingly transforming himself into a romantic rival of Avenzano. The chef invites Fox to winter in Florida and write his authorized biography. David gradually becomes sucked into the restaurant’s vortex: shipments of cocaine coming up from the Caribbean; the Mafia connections and unexplained murder of the chef’s original partner; the chef’s ravenous ex-wives, swirling in the background like a hidden coven. As his lover plots the demise of the chef, Fox tries to sort out hallucination and reality while Avenzano treats him like a feline’s catnip-stuffed toy.

Several years after the opening of Chateau de la Mer, the triumvirate of Avenzano, Walsh, and Ross appeared to be one big happy family, although there were rumors of strains in the relationship.
One night, at the height of the Festival of Champagne, there was an incident. Ross, a notorious womanizer, was sipping Cristal with a redhead at the restaurant’s corner table.
His wife slipped through the front door of the mansion, unannounced. Walking slowly through the dining room, past the Medieval memorabilia and dramatic cast-iron griffins, she strolled up to Ross’s table, took a revolver from her evening bag, and calmly shot him through the heart.
The ensuing chaos did more to establish Joseph Soderini di Avenzano in the American imagination than his designer pasta, his Bedouin stuffed poussin, his recipes transposed from Etruscan or Old Genoese, or his library of ten thousand cookbooks.
This was more than a good meal, after all. This was sex and death in Palm Beach. Even more intriguing was the chef’s refusal to comment on Ross after his death, except for informal and effusive eulogies in his famous baritone.
“Watch that Cristal,” David’s friend Bill Grimaldi told him before he left Manhattan to do an assigned story on the twenty-fifth anniversary of Chateau de la Mer. “It’s a killer.”