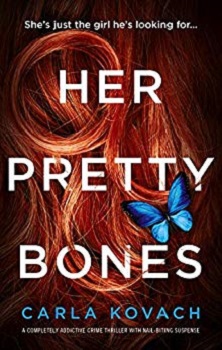 A young woman falls from a van speeding down a quiet road. Battered and bruised, she turns her head to the person who comes to her aid. ‘Help her’, she whispers before her eyes close.

Days later, the body of another young girl is found in a shallow grave just a few miles away. The similarities between the two girls are startling – same age, same frail body, same shocking red hair.

As the town fears there’s a serial killer living amongst them, Detective Gina Harte must put aside her own struggles at home, and catch the killer before he finds another perfect girl.

Early one morning a young girl falls from a moving van on a country lane and is nearly hit by the car travelling behind. The driver stops and phones for an ambulance and the police. The girl is in a bad way. She is dirty, malnourished, and has injection marks on her body.

Detective Gina Harte and her team are called in to find out what happened to the girl but it doesn’t look good for her and the doctors don’t hold out much chance of her s. Then a body of a young girl in a similar state is discovered in a shallow grave just a few miles away from the first scene.

Gina suspects that there might be other young girls in a similar state locally and is determined to find them before another one turns up dead.

This is the third book in the Detective Gina Harte series and the first book that I have read from the series. I didn’t feel like I was at a disadvantage by not reading the first two as this one was a completely different case and whilst there is some information about Gina’s personal life it wasn’t enough to make me feel lost.

The story begins with the prologue set in 1963 and with two little sisters falling out, then the book jumps forward to the present day. We follow Gina and her team as they try to discover what happened to the young girl who fell from the van. As another girls body is found the case opens up into more of a hunt for a killer and a place where he/she might be storing young girls.

We also meet a mother who is desperately searching for her daughter who ran away a few months ago and hasn’t been seen or heard from since. Plus we also read about a young girl working at a farm shop who is feeling uneasy as she seems to be getting unwanted attention from a man – Could this be our culprit and intended next victim?

The plot is told in the third person and we get to read about numerous different characters who all play a part in solving the mystery, some bigger than others.

The book has plenty of twists and turns to keep you guessing. I enjoyed watching the detectives unravel the mystery and spent plenty of time guessing who the culprit might turn out to be.

The book had me gripped to the pages. I read it in one day not wanting to put it down for a second. This is a book that will keep you wondering what on earth is going on and how does the prologue fit in with the rest of the story – You’ll have to give it a read to find out.