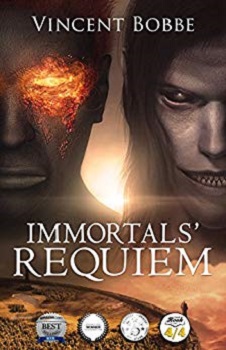 They are the dreams and nightmares of humanity, the ancient seeds of fairy-tale and superstition. These are the Immortals, creatures of magic that should live forever… and they are fading.

When a horror two thousand years dead returns to contemporary England, creatures long thought lost to myth and legend collide in a scramble for survival that could tumble civilisation back into the dark ages of blood and death.

Immortals’ Requiem is a Tolkienesque grimdark fantasy based in both a modern day city and vast supernatural worlds. If you like the idea of a drunken elf with a shotgun, an ancient warrior with a chainsaw and a whole host of violent supernatural beings you’ll love this gritty Amazon Number 1 Bestseller.

Immortals’ Requiem is a story that centres around five individuals whose paths intertwine as they all search for Cú Roí ‘The Miracle Child’, who has set out to seize control of their civilisation and destroy all humanity in the process.

On our journey we meet vampires, werewolves, elves, shadow like creatures and a human who has lived for over 2000 years, along with many other immortal and supernatural beings, in the fight of good vs evil.

I have read many books in my time and as most of us probably do, I tend to stick to a particular genre as I know it is a story I will more than likely enjoy. Immortals’ Requiem is a fantasy book; not something I would usually pick up but I thought I would give it a try as the blurb sounded quite interesting. I’m very glad I did.

The story was gripping from start to finish, I found myself getting so involved in the book that I nearly warned my husband to look out for any vampires that may be lurking about. The story had everything you look for in a book, I laughed, I cried and was on tenterhooks the whole time. I enjoyed and cared for the characters and hoped the bad guys got what was coming to them. The only downside to this book is that it had to end.

If you haven’t got this book already then make it the next thing you do, I’m sure you wont be disappointed. I have read many books and this is up there as one of my favourites. I give this book a 5 out of 5 and am looking forward to any future works by this author.

Vincent Bobbe is nearly forty years old. When he was about ten, he tripped on an Edgar Rice Burroughs novel and fell into his own brain. He’s not quite managed to climb out yet, because the things that found him in there keep clawing him back in. He’s happily married with two young children and lives in Manchester, England. His wife is horrifically allergic to pretty much everything, so he doesn’t have any pets. This suits him.