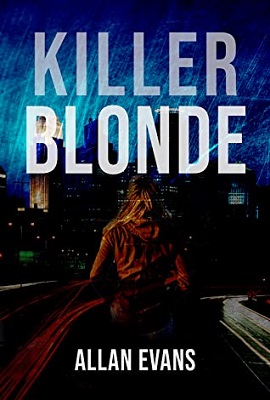 Every serial killer has a type. But what if that type is part of a larger, more dangerous agenda?

With virtually identical women being murdered in Minnesota, panic is causing huge political pressure to get the killer off the streets. Celebrated investigator Cade Dawkins is given the hot potato case and hopes to get it wrapped up before the governor has his head. But the killer has his own agenda—one that goes beyond simply murdering knockout blondes.

As it becomes a cat and mouse game between killer and investigator, Dawkins begins to realize he just may be the mouse.

This crime thriller is a cat and mouse chase between cop and serial killer.

The killer has been selecting beautiful blondes, killing them and making it look like an accident during his quest to antagonize the local State department’s best detective. Once the detective cottons on to this, it becomes a race against time to see who will come out on top.

The chase is captured from multiple points of view which lets the reader know what’s going on while the detective is still trying to work it out.

In my opinion, the characters were a little flat; they each filled a role but never strayed beyond that and didn’t develop as the story went on. They fit very much within the mould you’d expect in a TV crime drama, which I didn’t hate – I’m not against a little cliché in my crime thriller but the addition of a couple of internet memes was a step too far (if you’re au fait with viral tumblr posts, you’ll know them when you see them!).

Altogether, I quite enjoyed the thrill of the chase and even enjoyed shouting at the detectives for their terrible police work (letting the teenage niece of a victim in on gruesome details and sharing privileged information with the media) and random chunks of exposition. The writing style is well paced and effortless to read, which made for a great lazy-day read over the bank holiday.

This isn’t so much a dark thriller as a slightly camp crime procedural but I would recommend it to fans of crime thrillers looking for something a bit lighter to read.

Twin Cities’ author Allan Evans has been finding writing success of late. His debut novel, Abnormally Abbey published in September. A short story, Silent Night, is in the Haunted Yuletide anthology publishing in December and a serial killer thriller set in the Twin Cities, Killer Blonde, is publishing in early 2021. All are published by Immortal Works Press.

Evans has been an undercover investigator, fitness trainer, bodyguard, magazine producer, retail manager, advertising copywriter, employment recruiter and marketing manager. Beyond filling out his bio, these experiences have added color to his writing.

A soccer coach, he can usually be found on a soccer field somewhere, teaching kids about soccer and life.