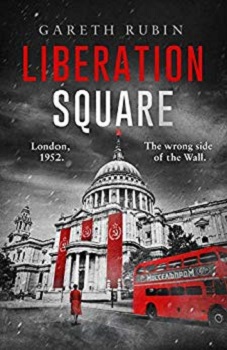 After the disastrous failure of D-Day, Britain is occupied by Nazi Germany, and only rescued by Russian soldiers arriving from the east and Americans from the west. The two superpowers divide the nation between them, a wall running through London like a scar.

On the Soviet side of the wall, Jane Cawson calls into her husband’s medical practice, hoping to surprise him. But instead she detects the perfume worn by his former wife, Lorelei, star of propaganda films for the new Marxist regime.

Jane rushes to confront them, but soon finds herself caught up in the glamorous actress’s death.

Her husband Nick is arrested for murder. Desperate to clear his name, Jane must risk the attention of the brutal secret police as she follows a trail of corruption right to the highest levels of the state.

And she might find she never really knew her husband at all.

The year is 1952 and World War Two ended seven years ago, but not how we remember it. In Liberation Square, the British lost the war and now the UK has been split into two sections, the Democratic United Kingdom lead by the Americans and Republic of Great Britain which is run by the Russian, all that separates the two areas is a huge war, guarded by armed soldiers.

Jane Cawson and her new husband Nick, a doctor, have been married for just six months. Jane is a teacher currently out of work. One afternoon Jane comes down with a migraine and goes to her husband’s doctors surgery to see him. When she arrives she is informed that he left to go for a walk about an hour ago and they don’t know when he will be back.

Jane decides to wait for him and enters his office where she discovers a pile of letters, one is scented and she is certain that the smell is that of her husband’s ex-wife, actress Lorelei. Convinced that her new husband is having an affair with his ex-wife, Jane goes to Lorelei’s house to confront them. However, when she arrives Lorelei is in the bath, dead. Jane goes for help and the police and her husband soon arrive at the scene.

After some questioning, the police let her go but not before she sees her husband being arrested for Lorelei’s murder. Convinced he is innocent, Jane and a British officer, Sergeant Frank Tibbot work together to discover what really happened to Lorelei and try to clear Nicks name, but Jane might just discover that her new husband isn’t exactly who he says he is.

This is the second book that I have read this year which is set in an alternative history after World War Two. Alternative histories are quite popular at the moment and I can see why.

The book had me engrossed in the plot from the opening scene. The UK is split into two sections, Democratic United Kingdom and Republic of Great Britain, both areas divided by a high wall, protected by soldiers reminded me of a certain president’s plans. A handy map at the front of the book shows you exactly where that divide is, just below Oxford. There is also a map showing you the centre of London as it stands now – or in 1952 when the book is set.

What is truly frighting about the book is how realistic it is and how the UK could of very much ended up as it is within the pages. It also has you questioning how well you can actually ever know a person.

There is great chemistry between the characters which radiates off the pages. The book is exciting and draws you into the events and has you eagerly waiting for the pieces to unfold and the plot to reveal what really happened to Lorelei.

The book is filled with rich secrets, at times I found myself rushing through the pages needing to know more. The story has been very cleverly written and is a complete mixture of genres thrown into one. From crime to thriller, mystery to historical fiction and even espionage too. It is incredible that this is Gareth Rubin’s debut novel as the writing is spot on and the plot is flawless.

Gareth Rubin is a British journalist and author. His journalism covers social affairs, travel, architecture, arts and health. His novel Liberation Square is a mystery thriller set in Soviet-occupied London.

In 2013 he directed a documentary, Images of Bedlam, about the connection between art and mental illness and how art can help people express that which they cannot put into words. It was filmed at the Bethlem Royal Hospital (‘Bedlam’) and interviews artists with a history of psychiatric illness.

He previously worked as an actor on stage and television. 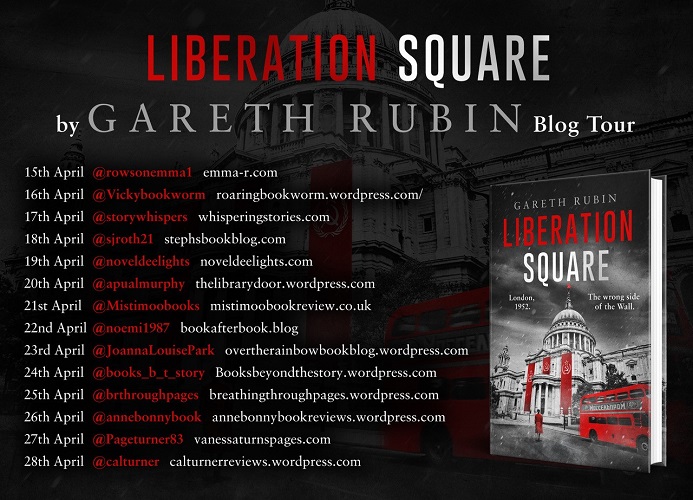