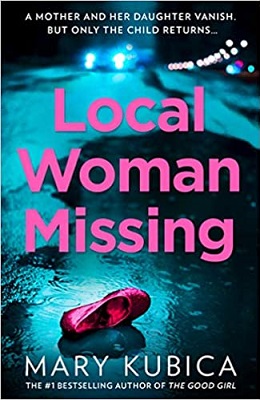 When a local mother and her six-year-old daughter, Delilah, suddenly vanish, their close-knit suburban community is rocked by fear and suspicion. How could such a terrible thing have happened in their small town?

Then, eleven years later, Delilah shockingly reappears. Everyone wants to know what really happened to her. But there are secrets hidden deep in the past – and when the truth about those missing years begins to surface, no one is prepared for what they’re about to find out.

Local Woman Missing is a twisty thriller/mystery set in a small community. When a young girl escapes from the clutches of her kidnapper and finds refuge at a nearby property she gives her name as Delilah Dickey. Delilah has been missing for eleven years, along with her mother, midwife Meredith. Her father is delighted to see her but her brother isn’t liking the attention she is receiving as well as being unable to put his finger on something that doesn’t feel right about her.

The book moves back and forth in time from the present to March and May eleven years ago. In March we see midwife Meredith helping heavily pregnant Shelby Tebrow, who not long after she has her child goes missing one night after setting off for a late-night ‘jog’.

In May eleven years ago we witness Meredith’s family and friends trying to find her and her six-year-old daughter as they are now missing too.

The story begins with a great hook featuring a kidnapped child. As the now seventeen-year-old is reunited with her family the thoughts turn to her mother Meredith who hasn’t been seen since the pair disappeared. Another case that the locals think could be linked is that of Shelby Tebrow whose body was discovered. The two women had a connection and only lived a short distance away from one another.

As the plot progresses you start to realise that not everything is as straightforward as it first seems. There were been quite a few red herrings thrown in and I walked a few wrong paths.

What I noticed about the book was how easy it was to read and that I managed to read it in just one day. I was intrigued by the predicament and wanted to know the secrets that this small community held.

The ending is a little far-fetched but it is a novel, not real life. Overall I enjoyed the mystery. It was an unpredictable, intense, and engrossing thriller and one I didn’t want to put down.

Mary Kubica is the New York Times and USA Today bestselling author of many novels. She holds a Bachelor of Arts degree from Miami University in Oxford, Ohio, in History and American Literature. Mary lives outside of Chicago with her husband and two children.