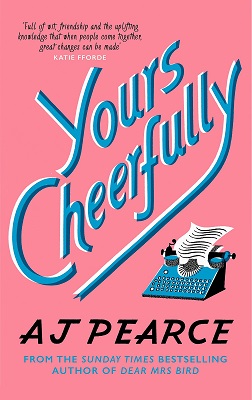 Yours Cheerfully
The Emmy Lake Chronicles

Following the departure of the formidable Editor, Henrietta Bird, from Woman’s Friend magazine, things are looking up for Emmeline Lake as she takes on the challenge of becoming a young wartime advice columnist. Her relationship with boyfriend Charles is blossoming, while Emmy’s best friend Bunty, is still reeling from the very worst of the Blitz, but bravely looking to the future. Together, the friends are determined to Make a Go of It.

When the Ministry of Information calls on Britain’s women’s magazines to help recruit desperately needed female workers to the war effort, Emmy is thrilled to be asked to step up and help. But when she and Bunty meet a young woman who shows them the very real challenges that women war workers face, Emmy must tackle a life-changing dilemma between doing her duty, and standing by her friends.

Every bit as funny, heartwarming, and touching as AJ Pearce’s debut, Dear Mrs Bird, Yours Cheerfully is a celebration of friendship, a testament to the strength of women and the importance of lifting each other up, even in the most challenging times.

I haven’t read Dear Mrs. Bird but I was assured that this book would be fine to read as even though they are part of the same series Yours Cheerfully could be read as a standalone. From my encounter with this book I totally agree.

England 1941 – Emmeline (Emmy) Lake is a young journalist working for Woman’s Friend Magazine. She is given the task of writing the responses in the agony aunt column, though she is to consult a more senior member of the team who will give her the advice, and then she is to write it up in a way that the women will find supportive under the signature ‘Yours Cheerfully’.

Just as she is starting her new role she is invited to a meeting at The Ministry of Information with the newspaper editor. The ministry wants to focus on encouraging women to take up the roles that have become vacant in the country as more men head off to fight in the war.

Emmy loves her new role and writes some encouraging and amazing hard-hitting articles featuring women working in places like the munitions factories and the injustices women face, plus their childcare issues.

What I first noticed about the novel was how inspiring and hopeful the book makes you feel. I know probably strange feelings given it is set back in 1941 but Emmy is a woman who had a strong personality and so much enthusiasm for her work. It was a real joy to spend time in her company.

I don’t think I have read many books set during WWII where the lead was a female, other than romances. I loved the feeling of a country coming together, the friendships that developed, and the attitude of the people at the time. Yes, there were some heartaches, it is set during a war, but the book was more uplifting than anything else. It also had plenty of old-fashioned British humour which did give me a good giggle at times.

I am now going to have to go back and read Dear Mrs. Bird, who sounded like a right character given the comments in this book.

AJ Pearce is the author of the Sunday Times Top 10 bestseller DEAR MRS BIRD, which was a Richard and Judy Book Club pick and shortlisted for Debut of the Year at the 2019 British Book Awards. It has been translated into fifteen languages and optioned for development for TV.

Born in Hampshire, her favourite subjects at school were English and History, which now (finally!) seems to be making some sense.

Her new novel, YOURS CHEERFULLY is the sequel to Dear Mrs Bird and will be published 24 June in the UK and 10 August in the USA.