All Our Hidden Gifts by Caroline O’Donoghue – Book Review

All Our Hidden Gifts by Caroline O’Donoghue – Book Review 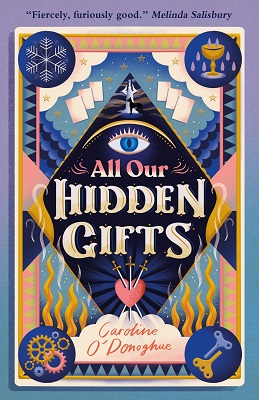 All Our Hidden Gifts

Maeve Chambers doesn’t have much going for her. Not only does she feel like the sole idiot in a family of geniuses, she managed to drive away her best friend Lily a year ago. But when she finds a pack of dusty old tarot cards at school, and begins to give scarily accurate readings to the girls in her class, she realizes she’s found her gift at last. Things are looking up – until she discovers a strange card in the deck that definitely shouldn’t be there. And two days after she convinces her ex-best friend to have a reading, Lily disappears.

Can Maeve, her new friend Fiona and Lily’s brother Roe find her? And will Maeve’s new gift be enough to bring Lily back, before she’s gone for good?

Irish Teenager Maeve Chambers finds herself in trouble at school. Her punishment is to clear out the Chokey, a long deep cupboard filled to the brim with items such as furniture and things confiscated from the pupils over the years.

Whilst cleaning she comes across an old walkman with a tape titled ‘Spring 1990’ and some Tarot cards. Maeve takes both items home with her. It isn’t long before she is learning all about Tarot. She feels like the cards talk to her and she has a gift, so much so that she starts to give out Tarot reading at school to the girls in her year with strong accuracy.

When her old friend Lily is forced into having her Tarot read by the other girls in their class a card that doesn’t belong in the pack makes an appearance. ‘The Housekeeper’ card features a woman with long dark hair, a white dress, and a knife in her mouth. The reading goes badly and as Lily storms off Maeve shouts after her ‘I wish you would just disappear’. A couple of days later Lily leaves her home in the early hours of the morning and is now missing.

The other girls at school think Maeve is a witch and turn their backs on her. As Meave begins to suspect she had something to do with Lily’s disappearance she sets about trying to discover where she is and return her to her family.

I love books that are a little different, strange even, and take you away from the norm and place you in situations that are just on the edge of reality. This book certainly ticked those boxes. I absolutely adored it. So much so that every time I put it down within a few minutes I had picked it back up again needing to carry on. It was certainly a book that you can escape into.

My snapshot of the book above gives just one element of this book, there is so much more to it including a Christian cult called Children of Brigid that are recruiting damaged and lost teenagers, they aim to oppose LGBTQ+ rights. The book also is very inclusive, featuring a variety of diverse characters who all show how they feel being opposed to and trying to live the life they want to in the way they want to in a society that deems anything not white or straight as abnormal.

The plot weaves many subplots together that work perfectly. The characters all brought something different to the story, they were three-dimensional, complex characters that all had their own issues and demons. I loved the magic element of the book too.

All Our Hidden Gifts is the first book in a new series and I can’t wait to continue the teenager’s stories and see what life has to throw at them in book two.

Caroline O’Donoghue is a journalist and author. She has published two adult novels, Promising Young Women and Scenes of a Graphic Nature, and is currently working on a collection of personal essays exploring her experiences of feminism and witchcraft.

She has a regular column in The Irish Examiner, and has written for The Irish Independent, Glamour, Buzzfeed and Vice, among others. Caroline also hosts Sentimental Garbage, a podcast in which she reviews commercial women’s fiction titles with other authors. All Our Hidden Gifts is her first novel for young adults.

What did you think of ‘All Our Hidden Gifts’? Share your thoughts in the comment section below!