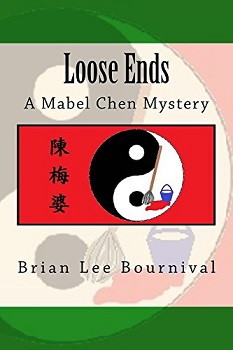 The extraordinary/ordinary cleaning lady sleuth, Mabel Chen—a woman who is ignored by all but one cop at the police station she cleans—is back to solve more exciting mysteries in “Loose Ends, A Mabel Chen Mystery,” the third book in the innovative Mabel Chen Mystery Series—a series which presents a unique blend of action, science, and Sherlock-like deductions.

While cleaning the police station one evening in late November, Mabel Chen goes into life-threatening anaphylactic shock. After several tense touch-and-go hours, she recovers and discovers that anaphylactic shock cases have become a nationwide crisis. Mabel knows she is allergic to bees. However, it has been several weeks since the last bee flew in Northeast Ohio. A wife shoots her husband while he is wearing a disguise that concealed his identity, and surveillance videos clearly indicate it was self-defense. However, Detective Fair Shaw thinks the shooting is “too” perfect. He believes it was murder.

Another fabulous read from author Brian Lee Bournival. It’s third book in the series of Mabel Chen Mystery’s and starts very dramatically with several people including Mabel Chen being very ill, collapsing and with many dying from anaphylactic shock, also a raid on a drug store, where the store owner was held at gun point and a murder. A very thrilling and gripping read for the readers!

Detective Fair Shaw is the lead officer in two of the cases and also linked to the anaphylactic shock as a friend to Mabel. It was a delight reading how he, Mabel and his grandfather Dillion worked through ideas and solutions to solve these crimes.

The general field fits perfectly the mystery genre, written with three main characters Fair, Mabel and Dillion. Very interesting the depth and scientific facts about the anaphylactic shock and how dramatic the effects of these allergies can be on the human body not just very ill but even death.

A very easy good read with plenty of action and excitement urging the reader on to the end. The main characters I know well. Like old friends which I have come to love, having read the previous books in the series but that didn’t detract or deter my enthusiasm for this book.

The book flowed with the plot unfolding with concepts well defined, clear and convincing and the outcome surprising us at the end.

I will certainly recommend this book along with the previous ones in the series. Thoroughly enjoyed it from start to finish and look forward to reading more from Brian Lee Bournival.

In 1989 Dr. Brian Lee Bournival earned a PhD in plant genetics from the University of Florida. He spent the next five years working as a postdoctoral associate—a glorified intern—before he made the brilliant deduction that there weren’t very many jobs in the plant sciences. He changed careers and earned his living as a statistical programmer. After weighing all the statistical probabilities, he now believes it’s time for another career change to author. His many scientific and programming experiences enable him to write authentic and intriguing mysteries.

Brian was born and raised in Northeast Ohio and loves to incorporate his familiarity with the region into his characters’ lives. He now lives with his wife and 16 cats—unfortunately, that number isn’t a typo—in beautiful rural Tennessee.