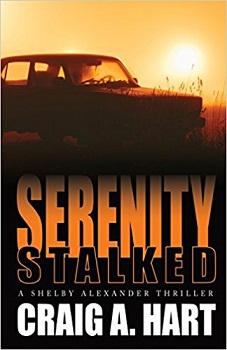 A cold-blooded killer has blazed a trail of dead bodies across the country, with no one to stand in his way…until he starts killing on Shelby Alexander’s home turf: the small Michigan town of Serenity.

A killer with a trail of dead bodies has come to Serenity, seeking to slake his thirst for death. As the first unspeakable murder shocks the sleepy Michigan town, the local media demands answers. Sheriff Wilkes, the crooked young lawman, targets Shelby Alexander, whose only crime is being in the wrong place at the wrong time.

Shelby moves quickly to clear his name, even as the killer closes in on his next victim…and this time it’s personal.

A while back I reviewed the first book in the Shelby Alexander series, by Craig A. Hart, Serenity. Now here we are on the second in the series and it was not a letdown! I have to say though that it wasn’t as fast paced as I thought it would be, after reading Serenity, but it was good all the same!

In this book, there is a new villain in the town of Serenity – a serial killer! Shelby’s girlfriend asks him to speak to an ex of hers who is harassing her.

After he pays him a visit, the family end up dead and naturally the ‘oh so annoying’ has decided that, somehow, Shelby is involved.

Carly, Shelby’s girlfriend, has a break-in at her house and he tries to convince her to leave with him, however, the stubborn young woman refuses to leave. Without Carly, Shelby leaves town to try and get the heat off him for a while. While he is away it turns out that this killer believes he is in love with Carly and, naturally, madness persues!

Serenity Stalked is a very easy read and I am looking forward to reading Serenity Avenged! 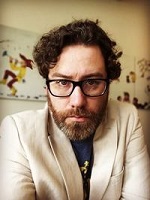 Craig A. Hart is the stay-at-home father of twin boys, a writer, editor, Amazon bestselling author, lover of the arts, and only human. He served as editor-in-chief for The Rusty Nail literary magazine and as manager for Sweatshoppe Media. He also served as director for Northern Illinois Radio Information Service, an outreach that brought daily news and information to the visually impaired.

He has been published in The Orange Room Review, Voices, The Stray Branch, Red Poppy Review, The Mindful Word, Inclement, Right Hand Pointing, 7×20 Magazine, and others.

Besides his award-winning novel, Craig is the author of The Writer’s Tune-Up Manual, The Busy Writer, and The Girl Who Read Hemingway. He is a weekly columnist for Five 2 One Magazine. He is also the author of the new Shelby Alexander Thriller Series.

Craig lives and writes in Iowa City with his wife, sons, and two cats.