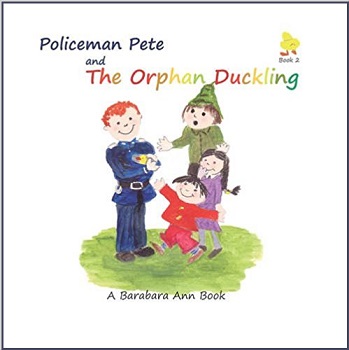 A delightful set of children’s stories following the fictional character Policeman Pete in his daily activities. All the books within the series are based on true occurrences that have taken place in Saddleworth, a civil parish made up of 7 villages nestled within the foothills of the Pennines in North West England.

This short story happened to one of our ducklings who we call Cheeky. He had been pushed out of the nest so we had hand reared him in the farm house next to the Aga. My two children Sarah and Adam took great care of him and did put on the orange flippers with much fun to encourage the chick to follow orange feet. He was lately successfully re-introduced to his family.

Policeman Pete found a lonely little duckling by the canal path. He decided that without a mummy the duckling would need looking after, so he scooped him up and took him to Farmer Bill who would know what to do.

Farmer Bill’s children, Adam and Sarah, asked if they could keep the duckling. They made him a bed out of a box, put in a fluffy hot water bottle, and placed him near the Aga, to keep him warm.

The children took care of the duckling every day. They even took him to school so that the class teacher could teach all the children about ducklings, but Adam and Sarah knew it wouldn’t be long before he was big and strong enough to join the other ducks outside.

This is the second Policeman Pete book that I have reviewed, the first was last week called ‘Policeman Pete and the Hungry Sheep‘. The books are short, but each has a wonderful, true story to share.

All the stories are set around the seven villages of Saddleworth, in the rural countryside. Each covers something that Policeman Pete had to deal with, or help with. Policeman Pete is not just a man in a uniform, he is a person too. Ms. Ann has shown that Pete not only goes out of his way to help others, but at the end of his shift he is just another normal person relaxing at home.

This is a lovely story about a duckling whose mummy has abandoned him, but because of Pete’s thoughtfulness, and the kindness of others, he found a place full of loving people to look after him, and help him grow.

The images accompanying the words are all brightly coloured, and done in a simple hand drawn, childish, style, and depict the story perfectly. I particularly like the facial expressions, and the smiley face in the sun, just like a child would have drawn it.

Another lovely, sweet book, that has a traditional look and feel to it. 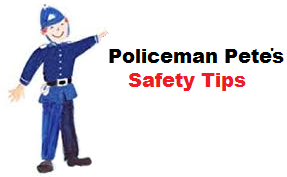 Policeman Pete says that if a dog or animal or bird runs at you it is best to be very brave and stand still, the animal will usually have a good smell at you then go away, or mummy and daddy will come and get you. If there is no-one near-by you should very slowly back away. Do Not turn round and run.