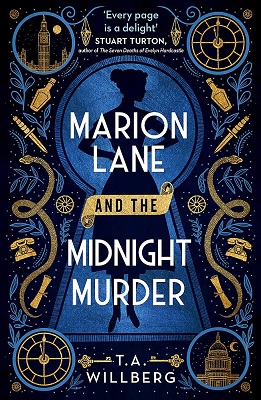 Marion Lane and the Midnight Murder
An Inquirers Mystery Book One

Elaborately disguised and hidden deep beneath the city’s streets lies the world of Miss Brickett’s, a secret detective agency. From traversing deceptive escape rooms full of baited traps and hidden dangers, to engineering almost magical mechanical gadgets, apprentice detectives at Miss Brickett’s undergo rigorous training to equip them with the skills and knowledge they will need to solve the mysteries that confound London’s police force.

But nothing can prepare 23-year-old apprentice Marion Lane for what happens after the arrest of her friend and mentor, Frank, on suspicion of murder: he tasks Marion with clearing his name and saving his life. Her investigation will place Marion and her friends in great peril as they venture into the forbidden maze of uncharted tunnels that surround Miss Brickett’s. Being discovered out of bounds means immediate dismissal, but that is the least of Marion’s problems when she discovered that the tunnels contain more than just secrets…

Set in London, England in 1958. Marion, 23, is a trainee detective working for an underground (literally) organisation called Miss Brickett’s who investigate those crimes that might get overlooked. People can call upon the services of Miss Brickett’s via a series of drop-off letter points throughout the city.

The staff can only enter and leave the maze of underground rooms and tunnels via a normal-looking bookshop which has staff members portraying as shop staff. When one of the staff members is murdered, panic sets in amongst the staff, as only one of them could be the culprit. When Marion’s friend, Frank, is found guilty, Marion is sure of his innocence and sets about discovering the truth and revealing the true killer, but if she fails her friend could be imprisoned for life and she could be kicked out of the agency with no-where to go.

Marion Lane and the Midnight Murder is a historical, fantasy, mystery book. It is quite a slow burner of a novel the whole way through. I loved the world-building. Yes, it is set in a realistic London, but the agency is a completely different world.

As this is the first book in the series it mainly focuses on inside the agency and a few of the agents and trainees. Plus, the investigation into the death of the woman who was the agency’s Border Guard. We don’t get to see outside investigations on the streets of London, which was a shame.

Marion is a complex character, who is still reeling many years later from the death of her mother. She has lived with her Grandmother Dolores since her mother’s death but circumstances have recently meant that she has had to find accommodation within the agency. She loves gadgets and works mainly in the gadgetry department with another trainee, Bill.

It was a classic whodunit, wrapped within a mystical, strange world full of secrets. It took me a while to get through the book due to the slow nature of it but I can honestly say that I did enjoy it and at times it was certainly suspenseful. I now want to know more about the agency and how they investigate crimes. Book two which is out next year seems to indicate that we will get to see Marion using her skills on the outside to find a killer that the police can’t identify. I am so looking forward to it.

T.A. Willberg grew up on a small-holding in South Africa. At 27, she moved to Malta with her partner and wrote her debut novel, MARION LANE AND THE MIDNIGHT MURDER. Though the novel is set in London, much of the inspiration for the story setting arose from the labyrinthine corridors beneath Malta’s ancient capital – Valletta.

T.A. credits her father, a mechanical engineer from Germany, as the influence behind the novel’s many wondrous gadgets and her mother, after whom the protagonist is named, as the architect of her love for books and storytelling.

When not writing, or dreaming up mystical subterranean worlds, she is treating patients in her spinal therapy clinic or consuming unhealthy amounts of cake and wine.

What did you think of ‘Marion Lane and the Midnight Murder’? Share your thoughts in the comment section below!