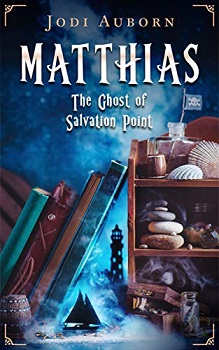 Matthias: The Ghost of Salvation Point

Ten-year-old Dylan is excited when his father inherits an old lighthouse and cottage in Maine. Dylan and his family get to live there all summer! He goes sailing on the bay, explores the small town down the road, and searches for a legendary pirate treasure that was said to be buried nearby.

After mysterious things start happening at the cottage, Dylan meets Matthias, a gruff lighthouse keeper who had died in a storm one hundred years before. A ghost! Dylan is startled to find Matthias living in his bedroom, but he is glad when they become friends.

It’s the best summer ever! Things change when they learn that the lighthouse is threatened by a greedy treasure hunter who also knows about the pirate legend. He will do whatever it takes to find the treasure…even kidnapping! As Dylan and Matthias team up to protect their home, they begin an adventure that changes Dylan’s life forever.

Ten-year-old Dylan and his big sister Alondra along with their parents are having a summer vacation in Salvation Point, Maine in a house that his dad has inherited from his Uncle Zack. Dylan’s dad used to live in the area and moved to New York to be with his wife and hasn’t been back for many years.

The house that the family has inherited is the old lighthouse keepers cottage. They also inherited the lighthouse but that is now run by automation and looked after by the Coast Guard.

From the moment the family arrives at the house, they sense something isn’t right as they can hear a piano playing which suddenly stops as they enter the property. Over the next few days, strange events happen, from footsteps and voices being heard to pictures re-appearing on a wall where they had been removed from.

When the local librarian tells the family the house is the most haunted place in Maine, their mum won’t have it as she disbelieves in ghosts but Dylan is determined to find out who is living in his house and it’s not long before he meets Matthias, the old lighthouse keeper who died a hundred years ago.

Dylan is excited at the prospect of having a ghost as a friend but the pair have work to do if they are to stop a treasure hunter in his tracks.

Matthias: The Ghost of Salvation Point is a middle-grade adventure/ghost story. The book is told from Dylan’s POV and follows him as he tries to find out what is happening at his new home for the summer and then once he discovers Matthias who died a hundred years ago the two have more adventures as they try to stop a greedy treasure hunter.

I can’t say the plot was particularly scary, yes there are some references to a presence early on in the book and strange occurrences but we know from the beginning about Matthias so I’m sure children will make the connection between the activities in the summer house and Matthias. I would say this is more of an adventure book.

The book flowed nicely and at a constant pace, although I thought the chapters were quite long for a middle-grade book and it took a while for Matthias and Dylan to meet. I was also disappointed that there were no illustrations throughout either.

For those children that like adventure books and pirate stories this would be a wonderful book to read and will keep them amused for a few hours.

Jodi Auborn became interested in lighthouses and the ocean when she was fifteen years old and went on her first vacation to Cape Cod, Massachusetts. Later in life, she made several trips to Monhegan Island and other small towns in coastal Maine, all of which inspired the setting for the fictional town of Salvation Point.