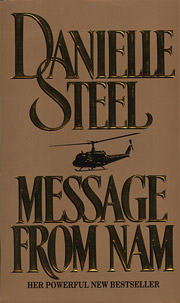 How do you tell someone what it’s like to kill a man hand to hand, run a bayonet through his guts, or shoot a sniper in the face who turns out to be a woman? How do you explain the nine-year-old boy who throws a grenade and kills your best friend? How do you tell them what it’s like? Or about the sunsets on the mountains or the green of Viet Nam, or the sounds and the smells, and the people, and the girl who can’t even say your name, but you know you love her. There was nothing any of them could say. So most of them rode home in silence.

For seven years Paxton Andrews would write an acclaimed newspaper column for Americans from the front, before finally returning to the States and then attending the Paris peace talks. But for her, and for the men who fought in Viet Nam, life would never be the same again.

Message from Nam, follows the life of Paxton Andrews.

We first meet Paxton as a school girl in Savannah, who declines an offer to attend Harvard University, opting to study journalism at Berkeley instead.

Whilst at Berkeley, she falls in love with law student, Peter, but when war breaks out in Vietnam, Peter is called up to serve for his country, and drafted overseas to fight.

When news gets back to Paxton that Peter has died in combat, she finds it hard to cope. To help with her grief, she wants to travel to Vietnam to see for herself what Peter went through, to understand why the war is taking place and why Peter died.

This is a heart wrenching, emotional, and at times grief-stricken story, surrounding life and the fighting in Vietnam, and one woman’s determination to not only report from the front-line, but to try to understand why the war is happening.

The book is powerful and informative about what happened during the war as it mixes a fictional story with real life.

Paxton is a wonderfully created character who I adore. She is headstrong, knows what she wants in life and will do anything to get there. She gets to witness some horrific scenes of war and we watch as she tries to come to turns with not only the events that she is reporting on, but also those that are happening in her private life.

We hear from the men who are fighting in the war as Paxton follows them and reports on their every move, whilst placing herself in danger on the front-line.

Over the course of seven years, she returns to Vietnam three times. We watch, as she grows from a young girl starting out her career in a war torn country, in to a woman, who has been through and reported on many tragic events.

She also has been through and seen enough grief to last a life time. Grief not only from those scenes that she has witnessed, but also for the men she has loved, and lost along the way.

The book is extremely powerful and at times it moved me to tears.

I think that this is Danielle Steel’s best work. It is well written and from her vivid descriptions, you get the sense that you’re not only reading, but are right there with Paxton.

I can’t stress enough how good this book is and how much I loved it.