The Viscount of Maisons-Laffitte by Jennie Goutet – Book Review

The Viscount of Maisons-Laffitte by Jennie Goutet – Book Review 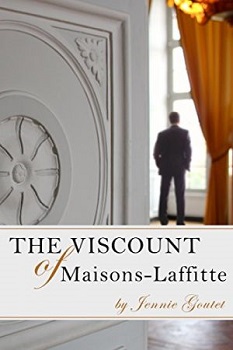 Single moms are not supposed to fall for rich French aristocrats!

There’s just no way he will ever choose her.

Is there such a thing as Prince Charming? Chastity didn’t take a teaching job in France to find hers, but a woman can dream, n’est-ce pas? If the father of one of her students–the Viscount Charles Jean Anne Monorie de Brase–is the best local example of princes, Charming or Otherwise, Chastity is ready to put aside any thought of falling in love again.

She’s had enough of his arrogance and would prefer him to keep his distance, yet it seems there is no avoiding each other. With the ongoing pressure of a repentant ex-boyfriend, a nefarious drug dealer, and an art heist that spans the decades, Chastity and the viscount are thrown together by circumstances she would soon rather forget.

As the intimacy between Charles and Chastity deepens, they must decide if their love is enough to bridge the gap between their disparate worlds, and if happily ever after can exist outside of fairy tales.

The cover design works well; we see the back view of a well-dressed man staring into the distance and I suspect this is how Chastity sees the viscount, an enigmatic remote figure, slightly out of her reach.

The backstory of each of the main protagonists is fed to us gradually, allowing us to get to know them and be party to their thoughts and conflicting emotions. I found Chastity to be a believable three-dimensional character but struggled a little with the multi-talented Charles who seemed to have an incredible number of strings to his bow.

Goutet displays a sound knowledge of Euripides’ play ‘Medea’ and she also gives us a small smattering of French throughout the book. She has clearly played to her strengths, which is always a good plan.

After a fairly slow-burning start, where the author has used the tried and trusted formula of antagonism and attraction in equal measure, the dynamic between Chastity and Charles gathers momentum. Along the way we meet various foils who aid and sometimes obstruct them through their separate voyages of self-awareness and awakening of the feelings they have for each other. We witness a gamut of emotions from love and devotion to jealousy, fear and anxiety and watch as both principle characters grapple with the complex issues surrounding single-parenting.

The writing style is gentle and very easy to read; Goutet gives us some very nice descriptive passages with a little humour along the way. There’s no gratuitously graphic content and it’s unlikely that the story will offend anyone. Some of the scenes were perhaps a little contrived but nevertheless, I think the book will appeal widely.

I must confess to not being a great fan of romance however, as an example of this genre, this work has a lot of merit. It is a neat and tidy tale and there were just enough twists and turns in the plot to keep me committed. I award ‘The Viscount of Maisons-Laffitte’ four stars.

Jennie Goutet lives just outside of Paris with her husband and three children, and she spends her time writing, cooking, chauffeuring small people about, and despairing over a weedy garden.

She is the author of romance novel, The Viscount of Maisons-Laffitte, the award-winning memoir Stars Upside Down (formerly called A Lady in France), and the children’s book Happy People Everywhere. She is a contributing author to Sunshine After the Storm, and That’s Paris – an Anthology of Love, Life and Sarcasm in Paris. She was a BlogHer Voice of the Year pick three times, and her writing has appeared on Huffington Post, Queen Latifah’s website, Mamalode, BonBonBreak and BlogHer.

She blogs at about faith, food, and life in Paris with her husband and three children. She also has an author website at jenniegoutet.com, which doesn’t get updated as often as it should.