Sponsored Post. Today we welcome author Carrie Hayes to Whispering Stories with her Promotional Post for her new historical novel ‘Naked Truth: Or Equality, The Forbidden Fruit‘, which was released on 29th February 2020. 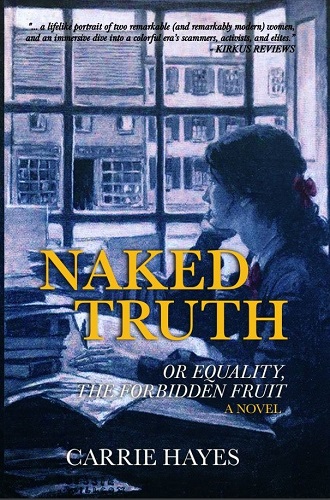 – This is an absolute must read for anyone who enjoys historical or political literature. 5 Stars

– It is fresh, it is vibrant, and the story is one that has been waiting to be told. 5 Stars

– Don’t miss this book, just be sure to read it next to your computer. it’ll have you running to Google for more information on these amazing women. 5 Stars

THE DOOR IS ajar, enough to lean forward and peer out. “My God!” Tennessee mutters. She was careful to arrive unseen by all and sundry and has been confined to the water closet a good thirty minutes. She opens her bag next to the commode. “Must I live this life always?” If she leans toward the left, she can spy her sister closing the drapes while someone else lights candles on a large round table. Tennessee fumbles out of her jacket and unbuttons her skirt. She leans toward the right, and her skirt falls to the ground. She pushes it aside with her foot, then steps out of her boots. She hasn’t bothered with undergarments. All she wears is a thin chain round her neck with a pick for the lock she practiced on earlier. “After tonight,” she promises herself, “you’ll be your own mistress.” Stock brokerage, Tennessee decides. She unpins her hair. Investment, that’s what she’ll do. After all, this is New York City. Enough with the séance shenanigans.
She slips on a gossamer sheath and runs her fingers over the fabric. It’s transparent, save for the illuminated paint they’d used earlier. Just a bit, here and there, to enhance its otherworldliness. She hears the participants enter, taking their seats around the table. They introduce themselves using their given names only. Tennessee puts a black cloak over her shoulders and angles herself to study the Spirit Box on the far side of the room. The box is tall as a man and made of quarter sawn oak. Earlier, when Victoria confirmed the appointment, Tennessee had protested that they hadn’t performed the Spirit Box in ages.
But Victoria had smiled, “It will be fresh then, won’t it?” which tickled Tennessee’s funny bone. Fresh for crazy, unrehearsed, and dangerous. Like it was when they were girls, scrambling, conniving, and doing their damnedest to make it work out. Then Victoria had added, “Afterall, Tennie, it’s not as though you’re a blushing virgin.” Which is true enough.
The candles are placed in front of each participant. Tennessee watches Victoria sit down next to a familiar looking woman.
“I thought your sister was in attendance?” the woman whose name is Harriet whispers to Victoria.
“She will join us later, at the reception,” Victoria answers, then says to the others, “May I request that we begin with one of my favorites, Jesus, Lover of My Soul? I am Mrs. Woodhull. I mean, Victoria,” and extends her arms as everyone at the table joins hands.
There is a moment’s stillness. “Oh, Lord,” Victoria says, looking heavenward. “It is my prayer that Your love may abound, so our hearts are pure and blameless for the day of Christ. Filled with the fruit of righteousness, to the glory and praise of God. Amen.” The participants answer, “Amen.”
Victoria gently releases the hands on either side of her and instructs, “After I am secured within the Spirit Box, please, blow out your candles and begin to sing.” A man walks her to the cabinet. He binds her wrists with a silken cord, then closes the door and locks her in. The key safely inside his waistcoat, he returns to his seat. Everyone there is a devoted believer, each with a passionate reason for attending. They rejoin their hands, their elbows suspended in the air above the table. Harriet blows out her candle and the others follow suit. The darkness is absolute. Someone begins, then everyone joins in.

In honor of American women winning the right to vote 100 years ago this month the ebook copy is FREE to download on the 26th and 27th August on Amazon. 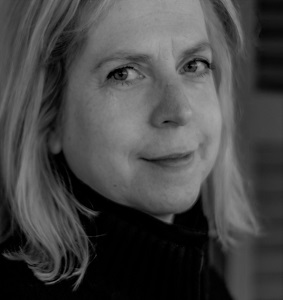 Over the years, Carrie has tried a lot of things. She’s sold vacuum cleaners, annuities and sofas. She’s lived at the beach and lived in Europe. She’s taught school and worked in film. For a while, she was an aspiring librarian, but she fell in love and threw her life away instead.