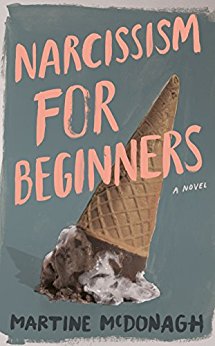 Meet Sonny Anderson as he tips headlong into adulthood. Sonny doesn’t remember his mother’s face; he was kidnapped at age five by his father, Guru Bim, and taken to live in a commune in Brazil. Since the age of ten, Sonny has lived in Redondo Beach, California, with his guardian Thomas Hardiker. Brits think he’s an American, Americans think he’s a Brit.

When he turns 21, Sonny musters the courage to travel alone to the UK in an attempt to leave a troubled past behind, reunite with his mother and finally learn the truth about his childhood. With a list of people to visit, a whole lot of attitude and five mysterious letters from his guardian, Sonny sets out to learn the truth. But is it a truth he wants to hear?

Narcissism for Beginners is a fresh, witty and humane take on the struggle to make sense of growing up.

This is a real gem of a book. Funnily enough, halfway through the first chapter I was struggling to find my stride with the unique voice of the main character but once I found my groove, I couldn’t put the book down.

Sonny is recovering from years of narcotic abuse in his early teens and as a result he’s neurotic and not a fan of changes to his routine, so when he turns 21 and his guardian hands him his birth certificate and some envelopes with information about his past – his routine is well and truly shattered.

The book is written like a letter from Sonny to his absent mother; following the information his guardian has given him, he goes to the UK to speak with the people who knew his mother best and ‘interviews’ them so you are given pieces of the puzzle as you go along. This is an ingenious and really interesting way of putting a story together and the nostalgia element really worked for me, especially with Sonny’s snide little judgements as he’s listening to their memories.

I didn’t find the ending of this book as satisfying as it could have been, but only because, like in life, you can’t always do anything with the new information you’re given. However, finding out each piece of the puzzle of his past was incredibly satisfying and held just the right amount of suspense.

Though it’s not listed as such, I would consider this book to be in YA territory for the coming-of-age theme and characters. I think this is a great read if you’re a fan of eccentric characters and personal intrigue – Sonny is very easy to like but it does take some time to get used to his little quirks and realise why he does the things that he does.

Martine McDonagh’s third novel Narcissism for Beginners has been likened in some quarters to JD Salinger’s Catcher in the Rye; in others to Adrian Mole meets Tales of the City meets Charles Manson.

Her first novel I Have Waited, and You Have Come, was described as ‘cataclysmically brilliant’ by author Elizabeth Haynes and praised in The Guardian and Red magazine. Martine worked in the music industry for 30 years, managing James, Fujiya & Miyagi and other bands, and is now programme leader on the MA Creative Writing & Publishing at West Dean College in Sussex.