Beach to the Baltic by Albert Talbot – Book Review

Beach to the Baltic by Albert Talbot – Book Review 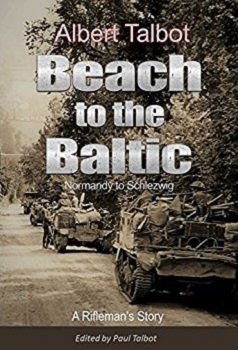 Beach to the Baltic
A Rifleman’s Story

This humorous, thought-provoking and poignant story shows what it was truly like for those brave young men who answered the call in 1939. The semi-autobiographical, historical novel was taken from the memoirs of a rifleman who served during World War Two in a London Battalion of The Rifle Brigade. It covers a six-year period from enlistment to demobilisation and gives a ‘fly on the wall’ view of a conscripted soldier, and all that that entails. As well as the cut and thrust of battles and the brutality of war it also focuses on the gloomiest days for Britain, when she and her subjugated allies stood alone against the might of the German war machine.

Born and bred in Camberwell, south of the River Thames, our hero Ronald Deakin relishes the chance to do his bit for King and Country, just as his father and uncle did in 1914. The day after his eighteenth birthday this chapel boy visits his local recruiting office, rather than wait for his call-up papers. Youngest of two sons he dotes on his widowed mother and loves the city of his birth and the Londoner’s carefree outlook on life, a facet that comes over strongly in the story.

His attitude to war changes dramatically once he experiences the horrors of Normandy and the bloody battles that follow. Sadly, many of his friends succumb during the bitter struggle, and he must draw on hidden reserves to help him survive, mentally as well as physically. Watching his friends fall around him fills him with immense sorrow and gives him much to reflect on. But as time goes on this young man grows in stature, confidence and an unquenchable desire to survive his war.

Eyewitness based narratives such as these are always valuable as so many of our war combatants returned home and said nothing about their experience. Some because they did not want to relive the unpleasantness, others because they considered their achievements to be nothing out of the ordinary. After all they were individually just one of around 3.5 million UK men to bear arms in the Second World War.

Ronald Deakin took part in some serious fighting as his unit moved across Europe from Normandy to Schleswig-Holstein in 1944-1945 giving us some close up action but the real value of this book is the day to day experience of army life which we do not usually get in a war novel. Like many others Albert had to wait some time before taking part in any serious fighting and he spent four years in the UK either training or quietly manning coastal defences before he went to France.  Beach to the Baltic provides interesting coverage of a soldier’s everyday concerns such as accommodation, food and laundry as well as keeping good health and coping with boredom.   Along the way there are a number of laddish events as would be expected among such a group of young men and some side stories that appear similar to those from other war recollections.

Paul Talbot’s introductory notes raise questions as to how auto-biographical this work is. Although the lead character is called Ronald his story appears to closely follow that of the author, Albert Talbot.  The narrative appears authentic and although it has, to some extent been edited it still has a very real feel to it.  I do not know how rough the original notes were and whether they would make reasonable reading on their own but it would be interesting to see them.

One term puzzled me a little and that was the use of the word Laager when describing a temporary camp or corral in a battle zone.  This Afrikaans word’s definition clearly fits its use but it is not a term that I have read in other British War literature, either fact or fiction.

I found Beach to the Baltic to be an easy and entertaining read. What it lacks in writing style and plot is more than matched by the authenticity of the true life experiences of one of our many heroes. I have awarded four stars.