AD – Today on the blog we welcome author Oliver Greeves, with his Promotional Post for his debut historical novel ‘Nelson’s Folly‘, which was released on 20th December 2020. Post includes an international giveaway so keep scrolling. 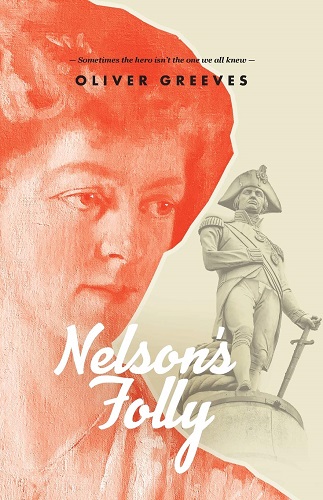 It’s 1792 and Captain Horatio Nelson has been beached for five years. He has tried to embrace country life in Norfolk with Fanny, but yearns to be at sea fighting the French. The French revolution relaunches career and he returns to the navy taking his thirteen year old son, Josiah, with him. He leaves Fanny to guard his reputation in fiercely snobbish Georgian society. As she rebuilds her life without him, problems brew at home and at sea. Horatio’s decisions lead to great victories and as many surprises, sacrifices and betrayals.

From France to Egypt and the Court of Naples, Horatio and Josiah’s adventures intersect and conflict. Years pass and Horatio finally returns to England a hero, but he has changed. How is a self-reliant woman going to face down the Navy’s superstar?

Nelson’s Folly offers new insights into the Nelson Myth and gives a voice to victims drowned out by the populist legend. A compelling exploration of duty in all its forms, it is a sweeping, historically rich novel based on the true story of Horatio and Fanny Nelson and their lives together – and apart.

“It is a compelling account of [famous] people and relationships … Greeves brings them brilliantly to life… Strongly recommended. Even for Nelson fans.” – John Gilbert – The Naval Review.

“A real page turner revealing the human side to great figures of history. That it was written by a descendant of Fanny gives the book extra insight and authenticity.” – Andrew Browning, Amazon Australia, 5 stars.

“An engaging and frequently exciting novel showing that heroes are often flawed when closely examined. The author has created a wonderfully descriptive narrative with contextual snippets and leads us to want more.” – Mr C Oldfield, Amazon UK, 5 stars.

“The author takes you right into the world of 18th Century England and brings it alive with nuanced characters. One minute I felt like I was in a Jane Austen novel … the next minute, we’re in a battle scene! The last few chapters are particularly riveting, and I could not put the book down. Highly recommend!” – Elena M, Amazon US, 5 stars.

As a direct descendent of naval hero Horatio Nelson’s wife Francis and her son Josiah Nisbet, it surprises many people to discover that my famous ancestors “off-limits” when I was growing up. There seemed to be something sad and mysterious which kept my parents and my grandmother, Fanny’s great-great-great granddaughter, Bertha Eccles, to whom I have dedicated this novel, from
talking about either of them. When new letters were discovered casting new light on Fanny and Horatio’s relationship, I began to discover her true story and more about the fascinating Napoleonic era.

I believe in the importance of truth-telling in historical fiction but also the power of fiction to Inform and entertain. I have a PhD in history from Bristol University in the United Kingdom and studied creative writing at the New School in Greenwich Village New York during my time working in Wall Street.

I am currently working on a sequel based on the naval adventures of Fanny’s son Josiah, stepson of Lord Nelson. When not writing, I enjoy spending my time with my family and also sailing on beautiful Sydney Harbour as well as advising leaders and coaching the next generation.

Fancy winning a paperback copy of Nelson’s Folly? Enter via the Rafflecopter widget below. Open internationally. Prize will be sent direct from the author in Australia. Good Luck.