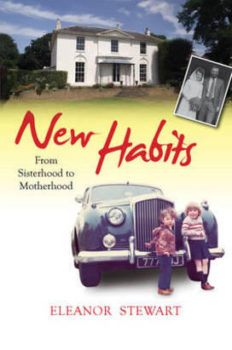 The sequel to the popular Kicking the Habit.

When Eleanor Stewart abandoned her vows and her life as a nun, she found herself in the middle of the swinging Sixties – and soon joined in. Boyfriends, parties, and mini-skirts took the place of silence and restraint, as she pursued her career as a midwife and the men she met with equal commitment.

Troubled by her relationship with her mother, and what she saw as a growing estrangement from her faith, she finally falls in love and settles down – only to discover her past catching up with her, as she faces infertility. But with her husband at her side, they battle to adopt two children.

Will the dream of a happy family, that drove her out of the convent, finally come true?

When I was asked to be a part of this Blog Tour, I was unsure. Not being a particularly religious person, I was concerned that ‘New Habits’ would be quite a religious book, but something drew me in and I accepted. The reality was the complete opposite to what I imagined the book to be like.

New Habits, is Eleanor Stewart’s memoirs of her time once she had left the convent, carrying on from her first novel, Kicking the Habit.

The book is split into four parts:

In the first half of the book, we discover how Eleanor’s life couldn’t be more opposite from that of a nun. I never expected to be reading about her drinking, partying, smoking, bedding different men and being open and carefree. I was also a little shocked at her relationship with her mother and how her mother overwhelmed her so much.

Eleanor certainly was determined to have fun in those first few years after leaving the convent, though she did need to be taught how to dress appropriately for the era and even how to open a bank account. Living with her two best friends Di and Dee, you get to read all about their lives as three single woman in their twenties and their midwifery careers.

During the second half of the book, Eleanor has grown up and wants to have that family she has so desperately wanted for many years, and the reason she left the convent. She falls in love and marries her brothers friend, John. Unfortunately not everything goes smoothly for her and her new husband. You feel the emotions pouring off the pages and hit you right in the heart when Eleanor becomes pregnant and then loses the ectopic baby. After the loss of her child, she is told that she can’t have children of her own. The hurt and anguish from that heart-breaking moment is so bravely told and the way she dealt with the situation was commendable. With the knowledge that she can’t have her own children, John and Eleanor faced the anguish of going through the process to become adoptive parents. Their first child, a little girl of ten weeks, Esme Jane, sounded like an adorable little girl, but it was the way the authorities handled the fostering and adoption of their son Paul that had me feeling really angry. I was overwhelmed with joy when everything came good at the end, but it certainly was a battle, and I felt for all of them.

The book was easy to read and had a natural flow to it. It made you feel like Eleanor herself was sat across from you and inviting you into her past. There are a lot of different emotions running through the book from joy to heartbreak and you feel every one of them. Its easy to forget that you are reading about someone’s life and how one person can go through so much in a lifetime. Eleanor is a strong minded, determined woman who, when one door is shut to her, will always find another to open.

I loved that each chapter title gave you a little hint as to what it was about, and the pictures of Eleanor and her family was a nice touch. I was enthralled by Eleanor’s life and found her so compelling. I sat and read her book for hours at a time, even becoming so engrossed in one chapter that I hadn’t noticed I had gone past my bus stop until quite a bit further down the road!

After reading the whole book, I thought back to my reservations and laughed. How wrong could I have been to worried about whether I would like it or not? I absolutely loved it and I am now looking forward to reading Eleanor’s first book.

A Word of warning though. Make sure that you read chapter 17, Night – July 1972, somewhere private, as it is a real tear-jerker of a chapter. I was trying to hold myself together whilst reading it on public transport.

If you liked "Call the Midwife", you will love "Kicking the Habit"

At the age of eighteen, Eleanor Stewart goes to France to enter a convent. What makes a fun-loving teenager turn her back on a life of parties, boys and the fun of the 1960’s, to become a nun and then later serve as a midwife in an inner-city Liverpool hospital? 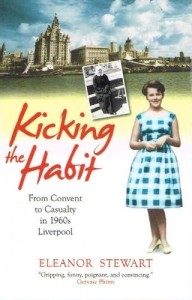 Kicking the Habit by Eleanor Stewart

While Beatlemania grips the nation, Eleanor struggles to reconcile the reclusive demands of religious life with the drama, excitement, and occasional tragedy of the hospital world. Can she live with the tensions she experiences?

Written with honesty and affection, this is a wonderful and intimate portrait of convent and hospital life in 60s Britain.

"Gripping, funny, poignant, and convincing, it is a powerful evocation of a world about which few of us know." – Gervase Phinn, best-selling author of "The Other Side of the Dale".

Buy Kicking the Habit: From Convent to Casualty in 1960s Liverpool from Amazon, Here.

About the Author: Eleanor Stewart worked as a State Registered Nurse and a State Certified Midwife in Liverpool. Following her nursing Career, she lectured in French at the University of Portsmouth. She lives in Portsmouth.