No More Heroes by Roo I MacLeod – Book Review

No More Heroes by Roo I MacLeod – Book Review 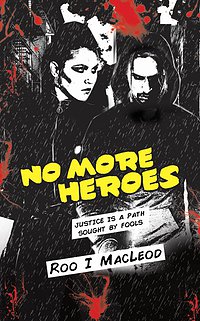 A murder on the streets of Ostere isn’t headline news. A vagrant running from conscription is common place. But this vagrant knew the deceased and was witnessed fighting with the deceased. So now the police want a word, as do the killers.

Ben Jackman, 20 year old slumbering vagrant by day, hunter of road kill by night, isn’t the man to take the fall. Proving his innocence is obvious, And finding the killer is crucial, but Ben needs a gun. Ben needs a big mother of a gun with a bucket of bullets, because the seedy streets of Ostere have a new breed of criminal and they aren’t looking to take prisoners.

Roo I MacLeod presents an interesting vision of a futuristic London where the country is run by a dictator who is constantly waging war somewhere. Society as we know it appears to have broken down although cigarettes, drugs and alcohol are plentiful.

I enjoyed this aspect of the story although there were many questions which were not answered such as how was life for the apparently law abiding middle class working people and why, with so many other infrastructure problems, was there an apparently perfect mobile phone network.

The text flowed well and the spelling and grammar were excellent; not always the case for a self-published work. I’m not sure why we have US spelling in a book written by an Australian in the UK but maybe when we reach that future time US spelling will be standard.My Kindle download gave me the added value of a free copy of another of Roo’s books A Collection of Dystopian Tales which I will look at when I have time.

The story itself was a bit thin and in the middle section was slow. About two thirds of the way through I found myself agreeing with the lead character when he said of the bag “But I’m beyond caring any more. I don’t care what’s in it or who gets it”. That said I did persevere and was rewarded by some action near the end which was not particularly realistic but made me smile. I won’t spoil it by disclosing the plot so read the book and you will understand what I mean.

Roo has challenged himself to create a dystopian world and No More Heroes is worth a read for this alone. I have awarded three stars.

Roo I MacLeod was born in Croydon, Australia on an excessively hot, humid day and fought three doctors, two midwives and the utilities type person against his entry into the world. This desperate attempt to remain womb bound, according to his mother left him with the ugliest mug yet to have graced the austere corridors of Nan Org Bush Hospital. Roo offers attached images as proof that his mother might be exaggerating, and finds it difficult to believe they’d let a utilities type person loose with a set of birthing forceps.

Time was served at a variety of schools before it was suggested he give living and working in the real world a go. So began his long sojourn trying to find the best and cheapest means of living. The Volkswagen beetle proved cheap, but uncomfortable for a man of such tall stature. In Darwin he found solace in a one bedroom house with 18 travellers (more commonly known as a squat) but found cohabiting with his own deranged thoughts hard, but 18 tourists caused neurotic tics, a dependence on alcohol and prescribed drugs and left him wandering the deserts of Australia totally unhinged.

A two man tent offered independence, until a tribe of angry natives burnt it to the ground. No one took the blame but Roo suspected the lads living in the dry river bed. They’d thrown rocks at him late one night when he wouldn’t share his hooch.

No More Heroes was conceived in a quaint English church when he took shelter from the rain. He stumbled into a funeral and found he’d doubled the mourners present. The vicar, a friend to this day, invited him to pray and sing a few tunes, and he, Roo and the young lady in black chucked dirt on the deceased come the end of the ceremony.