Now You See Me, Now You Don’t by Patricia Hegarty – Book Review

Now You See Me, Now You Don’t by Patricia Hegarty – Book Review 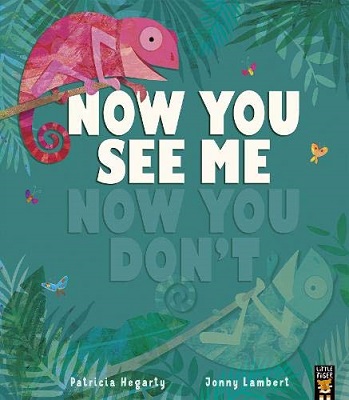 Now You See Me, Now You Don’t

Spot the invisible chameleon in this irreverent rhyming romp!

Chameleon is being naughty. He is very good at hiding in plain sight which makes him perfect for doing things such as scaring elephant, tickling sloth, and stealing orangutan’s banana.

The other animals are not happy with what has been happening but they don’t know who has been causing all the bother, but one animal does. Frog who can also hide in plain sight has been watching chameleon and decides enough is enough and teaches him a lesson.

Now You See Me, Now You Don’t is a fun children’s picture book featuring a mischievous chameleon who uses his ability to change colour, thus camouflaging himself against objects to trick the other animals. He enjoys causing mayhem and doesn’t realise that the other animals don’t like it.

The text is quite short and rhymes in parts though you realise pretty early on that not only is chameleon having fun playing tricks he also has some choice words about some of the animals and situations such as ‘Just look at old Big Ears’ when talking about elephant, and ‘Bedtime’s for losers’.

On each page/double-page, there are bright, colourful illustrations featuring different animals and scenery. There are also two hidden animals, chameleon and frog which children have to find.

The story is about a chameleon learning the error of his ways and apologising for the things he has done. Although it did take him to be on the receiving end to learn that the other animals in the jungle didn’t like his idea of fun.

I am sure children will enjoy the story as well as having to search each picture for the two animals. It is a book about kindness and learning that what might make you laugh might make someone else unhappy. The moral of the story is that it is never okay to find your happiness at other’s expense.

Patricia Hegarty began working in children’s publishing more years ago than she cares to remember and is now Editorial Director at Caterpillar Books and Little Tiger Kids. As an author, the range of subjects has been wide-ranging—pirates, princesses, trees, and bees have all become firm favorites.

What did you think of ‘Now You See Me, Now You Don’t’? Share your thoughts in the comment section below!