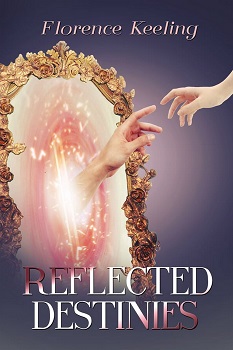 Laura is happy and content, she has a new boyfriend and loves her job teaching primary school pupils in London. But when she inherits a rundown house from a stranger on her 30th birthday, memories of her prom night come flooding back, memories of a scary encounter and an antique mirror in the very same house.

Laura visits the house with all its secrets and as she unravels the clues she reveals the biggest secret of all: her own destiny. But how can you change the future if it’s already written in the past?

We all know someone who is a nosey neighbour. That one person in the street who somehow knows everything about everybody. Here we meet Mrs. Rogers for the first time. She was such a fun character to write.

The keys to the new doors had been left with Mrs. Rogers over the road who had been happily making the various workmen tea and coffee and plying them with biscuits. In fact she had made it her mission to ‘keep an eye on the place’ while Laura and Jack were away.
“I bet you don’t recognise the place do you?” She asked as Laura had thanked her for her help.
“I didn’t think just those few things would make such a difference.” She had made to leave, eager to get started on the inside and have a look what the back garden had to offer.
“Of course I remember Mr. Matthews.” This piece of information intrigued Laura and she turned round. “Lovely man he was. A proper gent through and through.” She smiled. “This was my Mum and Dad’s house and my brother and I grew up here in the early sixties. He used to let us pick the apples from the trees out the back of the house. Of course I moved away when I got married but came back after my parents passed.” A quick sadness passed over her face before she pushed it away. “I remember my Mum telling me he’d gone to live with his daughter. She said he’d never been the same since his wife had died after having Lauren in the 1940s and living in such a big house on your own must have been ever so lonely. When Lauren had left to get married the house became more and more run down, it was like he’d given up.”
“So no one came to the house in all that time?” Laura knew she would have to invite Mrs. Rogers round for a cup of tea one day and get some more information out of her.
“Not a soul. Of course the local kids used to break in.” Laura looked away at this point. “Then there was that incident with the old man. So sad, dying like that with no one ever knowing who he was, of course they had to board the house up after that.” Laura made no comment. “So are you Mr. Matthew’s granddaughter?” Now it was Mrs. Rogers turn to try and get some gossip. Laura’s phone rang just at that moment.
“I’d best get that Mrs. Rogers. Thanks again for all you’ve done.” She walked down the neat path and out of the gate as fast as she could.
“I thought you needed saving.” Jack smiled as Laura hurried over the road to meet him by the gate.

Florence Keeling adopted for her pen-name her Great Grandmother’s name, chosen because of the shared birthday of April Fool’s Day. She is married with two teenage chidren. Born and raised in Coventry, England she now lives just outside in Nuneaton. Reflected Destinies is her first novel.

Florence Keeling also writes for children under the name of Lily Mae Walters. 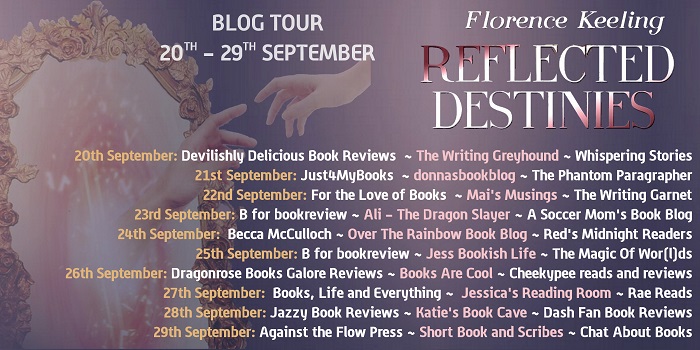