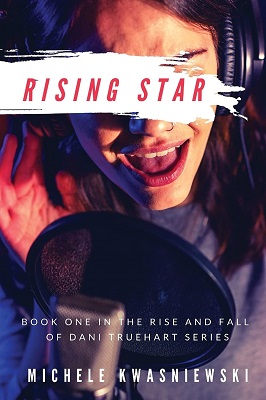 Rising Star
The Rise and Fall of Dani Truehart Book One

In the first book in THE RISE AND FALL OF DANI TRUEHART series, RISING STAR, fifteen-year-old Dani Truehart is living a life that is not quite her own. Driven by her mother’s desire for fame and fortune, she has spent her childhood dutifully training for a career as a pop star. On the brink of discovery, doubts begin to creep into Dani’s mind as she questions her own desire for fame, and she wonders whether she can trust the motivations of the adults who are driving her forward.

Following a brilliant audition arranged by her vocal/dance coach and former ’80s pop icon Martin Fox, Dani is thrown full-force into the music industry. She leaves her friends, family and scheming mother behind to move with Martin, who has become her legal guardian, into the Malibu compound of her new manager, Jenner Redman. Jenner, the former swindling manager of Martin’s boy band, leverages what’s left of his depleted fortune to launch Dani’s career.

Isolated from her life at home and trying to stay apace with her demanding schedule, Dani struggles to keep in touch with those she loves, connect to her withholding mother and find her voice as an artist. With Martin and Jenner at odds over their rocky past and finding herself unprepared to handle the pressures of her future singing career, Dani’s debut album and future stardom are at risk of falling apart.

Fifteen-year-old Dani Truehart is on her way to becoming the next big singing sensation. She has been working so hard for this for the last few years, egged on by her pushy mother who sees her daughter as a money-making machine.

When her mother oversteps the mark one too many times, Dani’s dance/vocal coach offers her a solution, he wants to become her guardian and take away her mother’s right to have anything to do with her daughter’s career. He also believes he can get her a deal with a music producer.

But moving to a new state, alone, to stay with people she barely knows and thrown into the limelight is starting to take its toll on her. Is she cut out to be the next rising star?

The first book in a planned series, The Rise and Fall of Dani Truehart, is a YA tale following the music career of the protagonist. The author, Michele Kwasniewski, clearly knows this industry very well as the scenes and situations came across very realistically. However, sometimes having the knowledge means that you try to share everything with the reader and at times the plot came a little bogged down with information that didn’t add anything to the story.

Not having any connections to this kind of industry, being in the UK, and a mother of a fifteen-year-old I found myself wondering why on earth someone would sign their daughter over to another and let them take them hundreds of miles away on their own to live in the same house a fully grown man. But like I said I don’t know this world and it most likely happens a lot. This also shows I became emotionally attached to the story.

This is a book I can see YA readers devouring. It is fast-paced in sections and was easy to read. Dani is a character that I am sure teenagers will be able to connect with, it will also show them just what they will have to do if they too want this life and that it isn’t’ a career filled with just sunshine and roses.

After graduating from Loyola Marymount University with a BA in Technical Theater, Michele Kwasniewski spent over fifteen years in film and television production. She worked as a set production assistant on movies such as INDEPENDENCE DAY, FACE/OFF, PRIMAL FEAR, and EVITA and as a production manager on television shows including BIG BROTHER. She is also a proud member of the Producers Guild of America. Michele’s colorful experiences in the industry inspired her to write THE RISE AND FALL OF DANI TRUEHART series.

Michele lives in San Clemente, California with her husband, their son, and a disobedient dachshund. RISING STAR is her first novel.