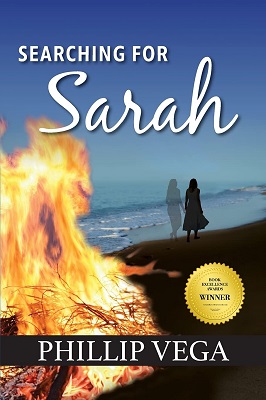 To fulfill a dying wish, a grieving Hispanic man uses his sister’s private journals as a guide in tracking down the love of her life, a woman named Sarah.﻿﻿﻿﻿﻿﻿﻿﻿﻿

But who is Sarah?

To solve this mystery, and to honor his sister’s final wish, Tom uses Nina’s personal journals as a guide, in his search for Sarah.

Frustration mounts as he delves deeper into Nina’s past, uncovering secrets that will change his life forever.

Will Tom overcome the seemingly never-ending obstacles and find the enigmatic Sarah before putting his sister to rest?

When Tom Ruiz learns that his sister, Nina, has died, he is gobsmacked. But another surprise awaits him when he reads Nina’s will. In it, she asks him to plan an out-of-the-box funeral and to “work on this together” with someone named Sarah. That’s when Tom discoverers he’s the only family member who didn’t get the memo that Nina was gay, and that Sarah was the love of her life.

But where is Sarah? She hasn’t been at work, she doesn’t answer her phone, and her voice mail is full. Tom is eager to consult her before planning Nina’s funeral, so he vows to find her. His only clues are the entries in Nina’s journals. He begins reading them for insights into who Sarah is and where to look for her and, in the process, discovers a lot about the sister he thought he knew.

What follows is not so much the story of Tom searching for Sarah (although there is some of that) as it is the story of Nina searching to find herself and understand her sexuality. Using brief journal entries as the foundation, the narrator crafts a description of Nina’s awakening realization that she is gay and how she and Sarah come to realize they are the one and only for each other.

Poignant at times, touching at others, and always engaging, this book grabbed my interest from page one and kept it to the last. It treats its major themes of love and acceptance with respect and dignity. The narrative viewpoint alternates between Tom and Nina, and the form shifts between first and third person, but I thought these differing viewpoints helped rather than hurt the book’s readability.

Some readers might object to the way the book neatly resolves most of the story’s major issues for a feel-good ending. Admittedly, the complex problems facing the characters seem to melt away in the end. And even though Nina is dead, the book leaves you with a “happily ever after” feeling. I don’t consider that a drawback; I like happy endings. Readers who don’t demand stark realism should enjoy this book.

Even with its liberal sprinkling of Spanish and Italian phrases, Searching for Sarah is an easy read. I enthusiastically recommend it.

Phillip Vega has always been a storyteller, but he’d never put pen to paper until a few years ago. Suddenly, he had a publishing contract, and in the midst of the vortex of marketing, analytics, refining, and continuing to write, he discovered what he defines as his true calling, his passion. He is now fully and happily immersed in the whirlwind that is the publishing industry, even as he diligently continues his work in software sales.

Phillip is a Long Islander with Hispanic roots, now living in Florida, and it is from those memories of summers in Long Island that he crafted his first book, Last Exit to Montauk. The Captain & the Queen soon followed, and he just released his third book, Searching for Sarah. He just can’t stop his brain from working through new ideas for future stories.

Comfortable in a room full of people or one on one, he welcomes opportunities for guest appearances, interviews, and book signings–and even more importantly, engaging with his fans.