Where the Stork Flies by Linda C Wisniewski – Book Review

Where the Stork Flies by Linda C Wisniewski – Book Review 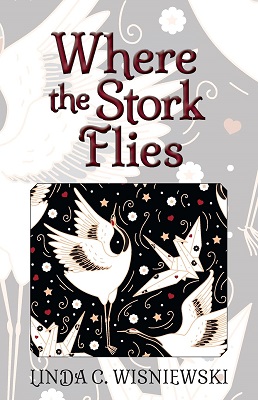 Where the Stork Flies

A Pennsylvania librarian, a 19th century Polish peasant and a wisecracking medieval queen join forces on a mission from the Black Madonna of Czestochowa only one of them understands. What could possibly go wrong?

Katherine (Kat) Kowalski is not a happy person. A minor indiscretion caused her husband to leave her, and her daughter soon followed Dad out the door. In truth, she’s been unhappy most of her life, ever since her own mother bailed on the family when Kat was 10.

Now she’s got a new problem. A strange woman has appeared in her kitchen and is nicking food from her refrigerator. But this isn’t your ordinary homeless person. Kat lives in Pennsylvania, but the intruder only speaks Polish. Kat doesn’t really speak the language despite her Polish ancestry. So, she hires a translator. That’s when she gets the real shocker: her “guest,” whose name is Regina, is from the Poland of 1825!

With the help of a mystical guide, Kat manages to get Regina back home to Poland and to the year 1825. Then, she decides to follow Regina into the past. After all, life should be much simpler in 1825, shouldn’t it? But Kat soon has second thoughts. Only after she reunites with Regina does she discover she must learn something about herself before she can return to Pennsylvania in 2017. She call on an odd combination of religion, superstition, and folklore for help, but will she be able to learn this all-important lesson, or will she be forever stuck as an early nineteenth-century peasant?

Where the Stork Flies is a decent book with competent writing and well-developed characters. The story is enjoyable enough even if it isn’t completely original (I felt parts of it recycled Frank Capra’s It’s a Wonderful Life as a Polish peasant drama).

However, there were some things about the book that kept it from being as pleasant a read as it could have been. Most annoying was the liberal use of Polish words and phrases. There were enough of these to be a frequent distraction. I had to stop reading and look them up in Google Translate (Kindle’s translation feature does not include the Polish language). In addition, finding portals scattered around in various places had having them toss Kat and Regina around in space as well as time reminded me of a malfunctioning transporter in the original Star Trek series.

Kat spends much of the book beating herself up over her failures in life and her inability to make good decisions. Granted, this is an important aspect of the story, but the frequent hand wringing seems excessive and eventually becomes monotonous. I also had difficulty accepting a situation near the end of the book where the characters solve a complex problem with a simple (and probably ineffective) solution.

Overall, Where the Stork Flies isn’t a bad book. If you get past having to decode Polish phrases, the story itself is pleasant enough. But don’t let the title fool you. I don’t think it’s too much of a spoiler to say that storks only make a brief cameo appearance.

Born and raised in Amsterdam, NY, a town that is a major character in my memoir, Off Kilter, and my novel, Where the Stork Flies, I now share an empty nest with my retired scientist husband in beautiful Bucks County, PA, where I teach memoir workshops for the Pearl Buck Writing Center.

As a former journalist, I write about the connections we make by giving each other the time and space to be heard. My personal essays have been widely published in newspapers and literary journals, and I’ve been nominated for a Pushcart Prize.

We have two grown sons and love to travel. Our favorite spot is the beautiful Hawaiian island of Maui.

What did you think of ‘Where the Stork Flies’? Share your thoughts in the comment section below!