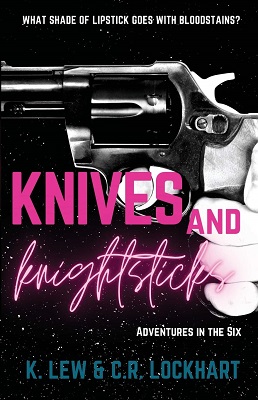 Knives and Knightsticks
Adventures in the Six Book One

What shade of lipstick goes with bloodstains?

Sadie and Zoey, best friends and sharers of shoes, have both lost their jobs for Very Bad Reasons. Sadie ditched her lawyer boyfriend (who happened to be her boss) and Zoey followed her nose into a story that shattered her burgeoning career as a journalist.

When the story that destroyed Zoey’s career lands her next to a dead body, Sadie’s new job at the police station makes for the perfect spy. Unravelling the mystery proves to be more dangerous than expected, and the two find themselves wedged between romance, organized crime and deciding what shoes go best with a stakeout.

Knives and Knightsticks was so much fun to read, Sadie and Zoey are best friends that are all about loyalty, fun, romance and making terrible decisions.

Both of them are at a crossroads in their lives, Sadie has just broken up with her abusive boyfriend/boss and Zoey has found herself blacklisted as a journalist after a story she wrote ruffled some feathers.

One thing leads to another and Zoey ends up discovering a body which may be connected in some way to the story that ended her career. Instead of letting it go like a sane person, she runs headlong into danger in an effort to find out what’s going on. Sadie doesn’t stop her from pursuing her plan so much as temper her ideas into something a little safer, which is one of the sweetest things about this book. She knows that her best friend is a larger than life personality and loves her for it rather than despite of it.

They’re both hilarious, very realistic characters, and their friendship is a goal!

The two best friends happen to fall for two incredibly hot cousins, which I didn’t manage to enjoy fully because the story treads the line between cosy mystery and something darker so I couldn’t fully root for the romance storyline without knowing how it was going to end, even if I was getting all kinds of fuzzy feelings watching the relationships develop.

This book ticked all the boxes I needed in a book right now – women saving the day, funny female friendships, and a good mobster mystery.

K. Lew is part of a writing team with her best friend, C.R. Lockhart. When one moved to the opposite end of the country, they moved their wild adventures to paper. The more they talk, the crazier it gets.

She now lives in a suburb of Toronto, Canada, where she found her man and her dogs. She misses the good sushi but loves the country trails and down-home people. She keeps her inner City Girl alive by wearing incredibly impractical shoes and rapping in her car.