15-year-old Tyler’s teenage angst turns to outright rebellion when his family leave London for a new life in Yorkshire. He’s angry with his parents about the upheaval and furious at losing his home. With only the dog to confide in, Tyler has no idea that a chance meeting with a skinny girl called Spider will lead him into a world he never even knew existed. Spider is sofa surfing and Tyler finds himself spinning a tangled web of lies in his efforts to help her escape her world of fear and insecurity.

Sofa Surfer shows how empathy and action can help those without a home to go to. As with his widely praised debut Me Mam. Me Dad. Me., Malcolm Duffy finds humour and heart even in dire situations. Relevant, warm and rewarding Sofa Surfer is about what happens when going home isn’t an option.

Teenager Tyler has had his world turned upside-down when his parents up sticks and move the family from London to Ilkley, Yorkshire. He has no friends, hates the area, and is bored. Luckily he has a new dog to keep him company and the local Lido.

One afternoon whilst at the Lido, he is approached by a skinny girl asking if he can teach her to swim. Apart from that, her name is Spider, she is eighteen, suffers from anxiety, and that her mum died a few years ago he doesn’t really know much else. He does though need a new pair of headphones and so he agrees to teach her as long as she pays him.

Throughout the lessons it becomes clear that Spider doesn’t have much money, she is short each time, and when he sees her one afternoon asleep on a wall Tyler wants to know more. As her situation is unveiled he tries to help her but not everyone is happy with him getting involved or his methods.

Sofa Surfer is a YA book that covers some pretty important subject areas, from homelessness to family life and even dating. Tyler is angry that he has had to leave his school, friends, and life down in London to move to a place he’d never even heard of before and where he knows no-one.

It was supposed to be a big happy change for the family as both his mum and dad had new jobs, however, things were worse than they were in London. His dad is always working or golfing and his mum works from home checking websites/social media for things that need to be reported and removed. She is stressed and always working too. His little sister Tallulah is the only one who genuinely seems happy by the move.

Spider has had a tough life and has been sofa surfing for the last few years. She is staying with her cousin when she first meets Tyler but that doesn’t last long and so she is out on the streets again. She is a Geordie and her parts are written in her accent so get used to having to decipher the Geordie words.

Tyler, even at the age of fifteen knows that life is hard for Spider and wants to help her and has a plan but his parents are not happy with him and they seem to think that he shouldn’t be helping a homeless person and that it should be left up to the authorities. They see her as an unclean, scruffy, druggy or drunk, even-thought they haven’t met her.

Tyler’s parents annoyed me the way they approached not only the situation with Spider but also the way they spoke to their son and dictated his every move. Being the mum of three sons – 23, 16 and 14, I know this is not how you talk to your children and they could have offered a lot more support. It goes to show you how emotional the book can make you when you find yourself getting angry at fictional characters.

Author Malcolm Duffy has written a near-perfect novel that I found exceptionally touching. The subject matter of homelessness was done so considerately and he has tried to show the reader exactly what life can be like for someone never having a home of their own, just a sofa or a makeshift room in a woods. He especially tried to show what it was like for females – think to be homeless and penniless when the time of the month comes.

The chapters are short which kept the book moving at quite a fast pace and the character was realistic and easy to visualise, as was the area of Ilkley. I fell in love with this novel from the very beginning and I didn’t want it to end as I enjoyed it so much.

Malcolm Duffy was born in Newcastle-upon-Tyne. Having spent many years as a successful advertising copywriter he decided it was time to write something that didn’t have a pack-shot and logo.

The idea for his debut novel came when he was working as Creative Director at Comic Relief. He visited a project that helped women and children who’d suffered as a result of domestic violence. The idea for Me Mam. Me Dad. Me was born. But the book doesn’t just focus on the heavy issue of domestic abuse. The story is about a boy’s love for his mam. A mam’s love for her son. And a dad’s love for his boy. 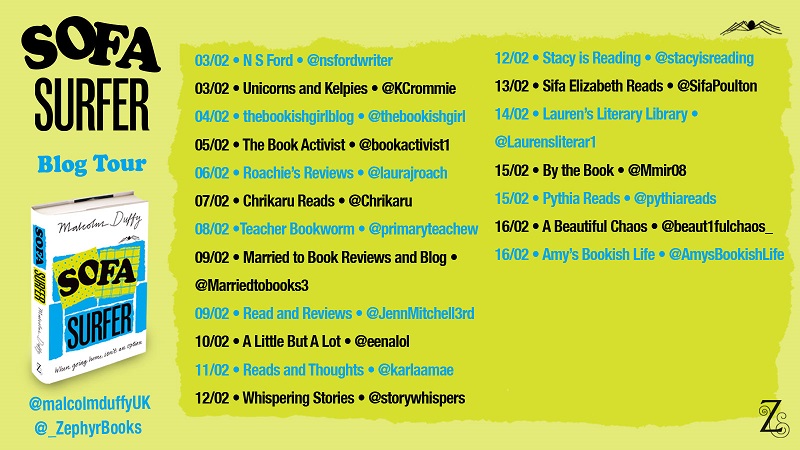