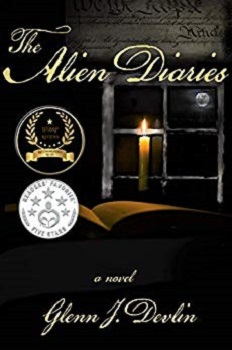 A book collector stumbles across a series of old diaries that chronicle an alien visitation in 1781.

The Alien Diaries is a very enjoyable book for those who both enjoy science fiction and historical fiction – it has an intriguing mix of Civil War-era details and speculation about extraterrestrial life. That being said, the title is quite the spoiler, because the inclusion of aliens is revealed later in the story as if it were to be unexpected.

The story follows the journal of Kate, in 1778, as she contends with her kind but strange new caretakers, and that of Colin and Maddie in present-day, charged with cataloguing and maintaining an old house in Virginia. Their tales begin to weave as Colin and Maddie experience strange phenomena involving the house.

In terms of narrative, it begins with a very intriguing first chapter. All subsequent chapters set in the past are the strongest parts of the novel. These sections are extremely well-researched and realistic, with an endearing narrator. The back-and-forth structure of the book from past to present keeps the reader’s interest and there are some very creepy scenes that add to the mystery of the house.

The main character, Colin, is likeable and his motivations make sense, but Maddy is frustrating at times, as she hardly contributes to moving the story forward. Colin does all the physical actions where Maddy-in-peril is usually the impetus for his actions. This could be overlooked if the romance had any chemistry. We aren’t given enough background about the characters to understand why they would be attracted to one another, other than the physical. They often feel like characters in a jump-scare horror movie – they exist in the story to move it along, but the story isn’t about their arcs.

That being said, the writing is very compelling, and the journal aspect is so much fun, that you can easily overlook the less-than-engaging protagonists. The seclusion of the property and the sombre tone help build an atmosphere of menace that pervades the text. The novel retains the same engrossing feel as an early X-files episode.

The ending isn’t the strongest, as it raises more questions than it answers, but the journey to get there is a fun mix of mystery, speculation, and excitement.

Ever since he began writing at the age of 10 in the basement of his parent’s home, Glenn has been winning awards. Glenn wrote a short story in high school about talking houses that earned him first place where he won a pocket dictionary. Later he wrote a conspiracy novel about a secret formula hidden inside of Rubik’s cube. The novel went nowhere but only whetted Glenn’s appetite to write more.

At Gallaudet, Glenn churned out countless short stories of horror and science fiction for the University newspaper, “The Buff and Blue.” He went on to win the Mac Dougall Creative writing competition and the Lillian Gourley Rakon Creative Writing Awards. Taking a stab at screenwriting while in college, his first script, “Wrath of the Dragon,” was a finalist at the 1988 Nissan Focus Screenplay competition sponsored by Columbia Pictures.

His screenplay, “The Alien Diaries” was a finalist during Amazon’s monthly screenwriting competition.

Glenn currently lives in Arizona with his wife, three children. He is currently working on his next novel.