Son of a Gun by Lee Ness – Book Review

Son of a Gun by Lee Ness – Book Review 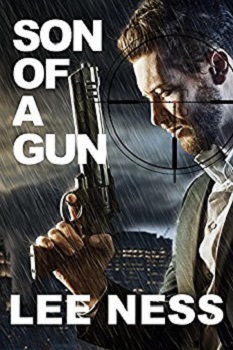 Son of a Gun

He was known as Eidolon – in Ancient Greek literature the name means an apparition, phantom, ghost. It is the name given to the world’s most feared assassin. No-one knows who he is, where he comes from, what he looks like or even how to contact him. Until now.

John King has lived in the shadows for a decade. No-one can find him because he has no history. Not one that could be traced anyway. He was just a normal person who chose the life he led. No government or military background to discover. He chose his own targets and always staying off the radar. He was a nobody that had a very unique skill set. That’s why he became known as Eidolon.

He was a nobody. But all that has now changed. Someone wants Eidolon dead.

The truth was that many people want him dead, but someone has found him and now the hunter has become the hunted.

Suddenly, the loner is no longer alone. He has to rely on others for help. He has a woman he is now responsible for and feelings for her threaten his impenetrable barriers. He’s left reeling by the changes. He’s no longer in control and everywhere he goes someone is out to kill him to claim the $10million ransom that’s now on his head. There is only one thing he can do. Take back control and become the hunter again……

Son of a Gun is the story of an assassin named Eidolon, which means phantom or ghost. The name is well chosen because nobody knows who Eidolon is and what he looks like. He lives a life under the surface and all by himself. A loner. Which is why he is so successful in his job.

Eidolon has two rules: He has killed many people, but he kills only if he thinks the world would do better without the victim. And nobody can get in touch with him, he is the one contacting his clients, not the other way around.

But suddenly, Eidolon finds that he no longer the hunter, he is the prey and is being hunted. Only one question remains: Who stands behind the hunt?

Eidolon finds himself in a very unusual situation and he quickly realises for the first time that he needs help from his friends and one woman in particular. He is not alone anymore. Which is something Eidolon has to get used to.

I took this book with me on my vacation, where I managed to finish it in two days straight. Honestly, I was quite surprised how much I liked it because I am normally not a huge fan of stories about assassins and political backgrounds. This story though, I really liked and enjoyed.

The author made it easy for me to sink into the adventures of Eidolon. The plot is gripping, the chapters are quite short, which made it a fast read. The one thing lacking, for me, was that the character Eidolon could have been a bit more likeable. He is an assassin, I know, and therefore it makes sense to make him a distant and introverted person, but I missed a bit of personality. But this is only a minor critic.

However, the book was a perfect read for my vacation. It was diverting, entertaining and very enthralling. If you are looking for a gripping book, I recommend reading Son of a Gun.

I am an athletics coach and I started out writing coaching and sport-related articles for Athletics Weekly and then Stack.com, adding in speedendurance.com later.

I decided I wanted to get more information out to athletes, coaches and parents so decided to take this further and write a book, which was released in 2014, called The Sports Motivation Master Plan.

While I was waiting for the book to come back from an editor, I was still getting up early, but not being productive. On a long drive in a mini-bus to an athletics event, I came up with the plot for a novel based around the ancient Olympic games and wrote that over late 2013 and early 2014. I had the bug then and wrote a short contemporary fiction story, but enjoyed the character so much, I turned this into a book as well.