Stop at Nothing by Lucy Martin – Book Review

Stop at Nothing by Lucy Martin – Book Review 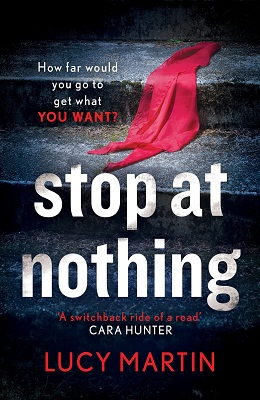 How far would you go to get what you want?

Amie Slade’s sexual assault feels too close to home for DS Ronnie Delmar. Forced to face the demons of her past, she vows to protect the family at all costs.

But everyone’s got a secret in this leafy suburb and when a child goes missing and a woman’s body is found, it becomes clear that this perfect family hide a sinister reality.

Someone here will stop at nothing to win, but can Ronnie beat them to it?

Stop at Nothing concerns the Slade family, consisting of Amie, our lead character and voice who is a vulnerable teenage girl who appears to be rather neglected and ignored. Her older brother Andrew, a stereotypical teenager. Maeve, the mother who is obsessively tidy and has her worries and concerns of her own, and Stuart, the father who is not that much of a father, though he is ridiculously good-looking and full of charm. At first, I thought these characters, this dysfunctional family, were too much of a cliché to hold my interest for long, but my mind was changed as I read on.

Amie attends an all-girls school, where she feels she does not fit in and is bullied by some of the girls. There is also a handyman who gets too handy with her and causes her life to dramatically change. I spent a lot of my reading time feeling very sorry for poor Amie as an awful lot of change happened in her young life all at once.

We also meet Detective Sergeant Ronnie (Veronica) Delmar who is very personable and plays a major role. She is a divorced woman with teenage children, and a sister. She also has a story to be told hidden in her past. Her police sidekick Baz is a bit of an unknown entity to start with, but as the story develops we come to know him better. We also meet social and psychiatric workers and one school teacher, in particular, has an important role.

The prose flows and keeps the story moving at just the right pace. The nearer to the end I got, the faster I found I was reading as I wanted to find out what happened next. This is a compulsive and twisted thriller that kept me guessing till the very end. It is a completely enjoyable read, though shocking at times, which reflected modern life and pressures within families.

Lucy Martin spent ten years as a city lawyer, working in the field of privatisations and joint ventures in Russia and the former Soviet Union. With five languages under her belt, she then set up a language school, which she runs alongside authoring a number of books on language learning and childcare.

Stop at Nothing is her debut novel and the first in a series featuring DS Veronica Delmar. Lucy lives in South-West London with her family.