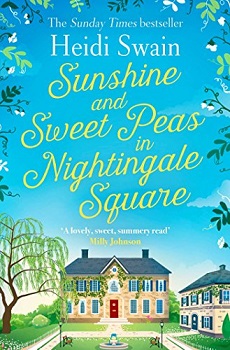 Kate is on the run from her almost-divorced husband who is determined to have her back, and she has found the perfect place to hide… a little cottage on Nightingale Square in Norwich, far away from her old life in London. But the residents of Nightingale Square don’t take no for an answer, and Kate soon finds herself pulled into a friendship with Lisa, her bossy but lovely new neighbour.

Within a matter of days Kate is landed with the job of campaigning the council to turn the green into a community garden, meanwhile all the residents of Nightingale Square are horrified to discover that the Victorian mansion house on the other side of the square has been bought by developers. But when all hope is lost, the arrival of a handsome stranger is sure to turn things around!

Newly separated Kate has decided to move away from the home she shared with her husband David in London to a place where no-one will know her so she can have time to herself and be alone. She finds a lovely little house in Nightingale Square in Norwich. However, not long after moving in she is welcomed to the square by feisty mum of three, Lisa, who tells her all about the parties and gatherings that the locals have on the green in front of her home and how much they are looking forward to Kate joining their little community.

Kate agrees to attend one of the celebrations and soon finds herself given the task of trying to get the local council to grant them permission to use the green to grow veg – she doesn’t know how she is given the task but is determined to see it through.

There is also the on-going issue of the large house at the end of the square, Prosperous Place. The house had been empty for many years, but now a team of developers wants to turn it into flats. The residents are quite rightly upset at the idea of the historic building being ruined, but better than the idea of the building being demolished completely.

After an afternoon spent with her neighbour Harold, Kate and another neighbour, Carole decides to go and have a look at the gardens of Prosperous Place before they are destroyed. Unfortunately, someone is in the building and catches the pair red-handed. Who is this man and what has he got to do with the house?

I’ve read a few of Heidi Swain’s books, so when I heard that she had a new book out I jumped at the chance to read it. Kate is a lovely character who has had a rough few years. We get to learn that her husband was unfaithful from the start. We also are kept guessing as to what else she is hiding as she refuses to tell people anymore, hoping to keep the rest of marriage breakdown a secret, though she does blame herself.

There are a lot of wonderful secondary characters too, each with their own personalities which shone just as bright as Kates. Including nosy Carole and her husband Graham. New mum Heather who thought she was above others until she had her daughter and struggled to cope and her husband Glenn and lovable elderly Harold, amongst many more.

If I’m perfectly honest I would hate to live in Nightingale Square. I’m a very private person, and some people would probably call me unsociable too. Living where people want you to join in community projects and be your best friend the moment you move in is my idea of hell. I’ll keep living in the city where hardly anyone knows me!

The book is just divine to read. Yes, I had predicted some of the outcomes early on, but the joy was watching my predictions come to life and blossom. The words flowed and had an easy read feel to them. It was the perfect book to sit in the garden with on a lazy sunny afternoon – actually two lazy, sunny afternoons.

This is an uplifting story of one woman finding herself again and discovering a sense of community and friends when she least expected them. It is heart-warming and was a complete joy to read. This is a book that will weave its way into your heart and leave you eager to read more by Ms. Swain.

Although passionate about writing from an early age, Heidi Swain gained a degree in Literature, flirted briefly with a newspaper career, married and had two children before she finally plucked up the courage to join a creative writing class and take her literary ambitions seriously.

A lover of Galaxy bars, vintage paraphernalia and the odd bottle of fizz, she writes contemporary fiction and enjoys the company of a whole host of feisty female characters.

Heidi is now a Sunday Times Best-selling author who lives in stunning south Norfolk with her wonderful family and a mischievous cat called Storm.

Her debut novel, The Cherry Tree Cafe, was published on July 16th, 2015 and became an Amazon bestseller.