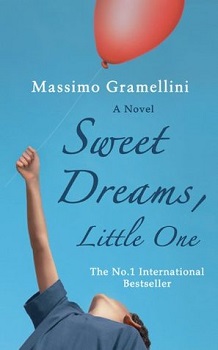 It’s early morning on New Year’s Eve, and nine-year-old Massimo wakes up to a long, doleful cry and the disconcerting image of his dad being supported by two strangers. Inexplicably, his mother has disappeared, leaving only a vague trail of perfume in his room and her dressing gown bundled up at the foot of his bed. Where has she gone? Will she ever come back? And will Massimo be able to say sorry, after quarrelling with her the night before?

At turns poignant and funny, Sweet Dreams, Little One – the most successful book to come out of Italy last year, and an international sensation – is the story of a secret which has been kept hidden for forty years and the uplifting tale of a boy who, as he grows into an adult, has to learn how to cope with the pain of bereavement and the demons of his own nightmares.

When Massimo was just nine years old, he awoke to find his mother’s dressing gown at the end of his bed. In the living room, two men were holding his father up. This would be the scene that would haunt him forever. This was the day he was told his mother had died.

Growing up with just his father he found life hard. He was sad, grieving for his mum. He became a shell of his former self, bullied by his peers and he needed someone, anyone, to love him, truly love him, but no-one did.

Growing into an adult, Massimo still found it hard to move on. The loss of his mother at such a young age had left a hole in his heart; one that he didn’t know how to mend.

‘Sweet Dreams Little One’, is a very poignant book, often heart-wrenching and gut-twisting. It is advertised as a work of fiction, but as you read from chapter to chapter you get the sense of that not being entirely accurate. The book is told as a chronological memoir, with the main character having the same name as the author, making me very suspicious as to whether the publisher was being entirely truthful.

Massimo (the character), is one that you just want to throw your arms around, to tell him that everything will be okay, and to love and protect him. However as the years went by, Massimo still harboured that self-pity. He became a character that I didn’t much care for or like anymore.

Sweet Dreams Little One is beautifully written. It is often painful, and will have you reaching for the tissues more than once. It is a great work of fiction, if that’s what it really is!