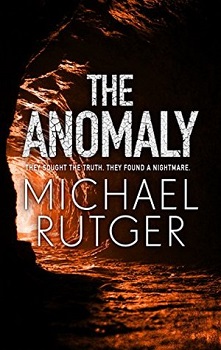 THEY SOUGHT THE TRUTH. THEY FOUND A NIGHTMARE.

A team of explorers seek ancient treasures, hidden in a secret cave.

At first it seems they will return empty handed. Then their luck turns.

But the team’s elation is short-lived as they become trapped there in the dark, with little possibility of escape.

Then events take an even more terrifying turn.

For not all secrets are meant to be found . . .

The Anomaly tells the story of a television crew’s adventure into the Grand Canyon, on a quest to find ancient treasures hidden in a cave, whose existence dates back to articles written over a hundred years ago about explorer G E Kincaid. Nolan Moore is the leader of the expedition. He is a wannabe television/movie star, previously presenting online content about conspiracy theories, archaeology, mysteries etc; think low-budget X-Files and you won’t be far off. The team is made up of a reasonable cast alongside Nolan: the producer, assistant, camera man, financier representative and a journalist.

The journey begins with the group setting off to the Grand Canyon, climbing down one of its paths into a restricted part area of the canyon, and travelling along the river. Having failed to find the entrance to “Kincaid’s Cave”, just as they are about to call time for the day, luck would have it that they catch glimpse of the entrance.

When exploring the caves, a trap-trigger is set off, resulting in most of the team being trapped inside. That is when their troubles begin, as not only was the cave entrance sealed off, but an amazing sequence of events was triggered, leaving the team trying desperately to find an escape, before it is too late.

It is suggested that this book would be a good match for fans of Dan Brown, which is what drew me to the title. The similarities are there to see. Rutger’s writing style is much like that of Dan Brown. The subject matter, being one of ancient mysteries offers a connection too. This book also contains decent, well-thought out subplots and twists, so I have to say that I thoroughly enjoyed reading this.

I did feel at times that the story was a little too sci-fi at times, but I can’t say that this detracted much in my enjoyment of the book. I did find that after saying to myself, “just one more chapter”, I was still reading half a dozen chapters later!

The book is an easy and enjoyable read, even if the end felt rushed a little, or perhaps things fell into place just a little too conveniently, but having said that, I enjoyed this book and can easily see Nolan Moore returning for another adventure.

Michael Rutger is a screenwriter whose work has been optioned by major Hollywood studios. He lives in California with his wife and son.