Sponsored Post. Today we welcome author William Savage to Whispering Stories with his Promotional Post for his ‘Ashmole Foxe Georgian Mysteries Series’ which currently includes six books, all available in ebook and paperback. 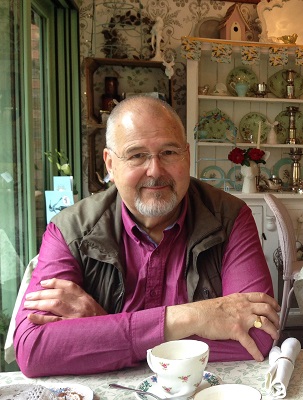 I started to write fiction as a way of keeping my mind active in retirement. Throughout my life, I have read and enjoyed hundreds of detective stories and mystery novels. One of my other loves is history, so it seemed natural to put the two together. Thus began two series of murder mystery books set in Norfolk, England.

All my books are set between 1760 and around 1800, a period of turmoil in Britain, with constant wars, revolutions in America and France and finally the titanic, 22-year struggle with Napoleon.

The Ashmole Foxe series takes place at the start of this time and is located in Norwich. Mr Foxe is a dandy, a bookseller and, unknown to most around him, the mayor’s immediate choice to deal with anything likely to upset the peace or economic security of the city.

The series featuring Dr Adam Bascom, a young gentleman physician caught up in the beginning of the Napoleonic wars, takes place in a variety of locations near the North Norfolk coast. Adam builds a successful medical practice, but his insatiable curiosity and knack for unravelling intrigue constantly involve him in mysteries large and small.

I have spent a good deal of my life travelling in Britain and overseas. Now I am more than content to write stories and run a blog devoted to the world of Georgian England, which you can find at www.penandpension.com. 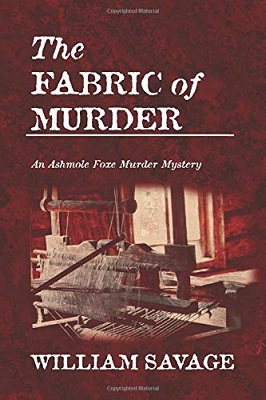 The Fabric of Murder
Book One

Mr Foxe must find the killer of a leading Master Weaver, before the collapse of his business empire undermines the city’s major industry.

Norwich in the 1760s is one of the most prosperous cities in England, finding its wealth in the booming trade in fine worsted cloth, richly dyed and embroidered. So when a leading cloth-manufacturer is found murdered and his business totters on the brink of collapse, everyone fears his fall will ruin hundreds of working families and cause the economy of the whole county to collapse.

In near panic, the mayor and aldermen turn to an unlikely person to solve the riddle: Mr. Ashmole Foxe, a man who claims to be a mere bookseller, yet lives in grand style, dresses like a dandy and associates as easily with the demi-monde as the gentry.

With few firm clues to go on and every sign the dead man himself had been hiding many secrets, Mr Foxe sets out to do as the City Fathers want. Who benefited from the death? Why had the murdered man been stockpiling cloth for months? Who is the stranger now trying to buy up all this surplus stock and what will he do with it?

Follow Mr Foxe through Norwich’s teeming 18th-century streets as he seeks out the answers and tracks down a killer with more than profit on his mind.

In this second book in the series, Mr Ashmole Foxe, Georgian dandy, bookseller and confidential investigator, finds himself alone and way out of his depth. The mayor is demanding he find the murderer of a prominent merchant and banker before the city is crippled by financial panic; Alderman Halloran is hounding him over the theft of some of his favourite books; and his much-loved companions, the Catt sisters, have left Norwich, unlikely to return.

Poor Foxe has no clues, few ideas and very little hope. The dead man, Joseph Morrow, was both a prominent and unbending puritan and a constant preacher against the evils of alcohol. So why did his body reek of cheap brandy? What caused his corpse to be found in the hold of a wherry, moored in a little-used and down-at-heel area by Fye Bridge? And what could such a pompous, self-righteous and rigidly Christian man have done that would provoke someone to murder him?

The Morrow family, headed by Joseph’s father Ezekiel, had long been one of the leading yarn-merchants in the city. Recently, Ezekiel handed over the running of the business to his elder son, Joseph, while he retired to live in a grand house as a country gentleman. Joseph, disliking the rough-and-tumble of the yarn trade, promptly turned his attention to becoming one of the new breed of bankers in the city. A very successful one too, by all accounts. That’s why his murder is sending shockwaves through the entire business community, and why the mayor is so afraid of a run on all the banks.

Can Ashmole Foxe expose his killer before panic ensues and hundreds of people lose their livelihoods? Can he find the book-thief and return the alderman’s books? Can he restore his reputation for high fashion and low morals without the Catt sisters? As he negotiates the Mr Ashmole Foxe, Georgian bookseller and confidential investigator, has a new case: to find the murderer of a prominent Norwich merchant and banker before his businesses collapse and the city is crippled by financial panic.

What could the puritanical and rigidly teetotal Joseph Morrow have done to provoke someone to strangle him? Why was his body, reeking of brandy, found on board a wherry, moored in a rough area haunted by sailors and prostitutes? What is the secret linking one of the the city’s grandest merchant houses to the wretches who drag out a brief existence in the slums and backstreets of the city?

As Foxe probes deeper, he finds disturbing evidence of cruelty, callousness and blackmail that will shock all those who knew the man. Aided by his rag-tag group of street children, Foxe steadily uncovers a sinister pattern of evil, whose dark threads reach out to snare the guilty parties and exact a fitting vengeance on all concerned. 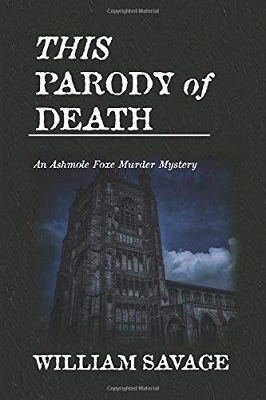 This Parody of Death
Book Three

Ashmole Foxe has encountered some odd people in his time, but few as strange and forbidding as this miserly, reclusive undertaker, whose murder he has been asked to investigate. All the man cared about was the arcane art of change-ringing on church bells, so it was somehow fitting his body should be found in the tower of St. Peter Mancroft church in the centre of Norwich. Yet how he died and why his body ended up there there are anything but clear.

Nor do the oddities cease there. The dead man’s father was once a famous artist and wood-carver — until his son imprisoned him in his own house. What do the carvings he left on so many of the wooden panels there mean? Why does the housekeeper keep coming up with different tales to account for her own part in the family history? Why are nearly all the rooms in the house kept locked? And why was the house burgled on the night its master was murdered, when nothing was taken?

It’s going to take all Foxe’s cunning and persistence to sift through a mass of suspects, all displaying plain signs of guilt; discover why nothing in the undertaker’s house or his past is what it seems; and reach beyond the lies and inventions to unravel an amazing tale of selfless love and obsessive greed colliding in a parody of death itself. 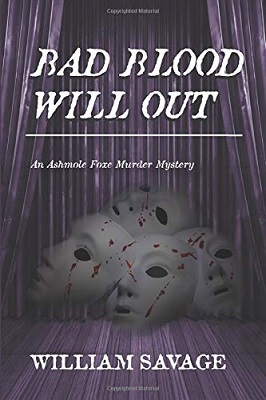 Bad Blood Will Out
Book Four

Ashmole Foxe is approached by the mayor of Norwich and the manager of one of its oldest theatres, both wanting him to investigate sudden, baffling deaths. Foxe loathes the theatre manager, so he’ll have nothing to do with his tale of ghostly apparitions and the murder of an alcoholic, has-been actor. Instead, he turns to the mayor’s request — to resolve the killing of a rich merchant.

The trouble is Foxe can’t quite put the theatre mystery out of his mind. Both cases contain inexplicable events. How did someone stab the merchant as he was hosting a grand masquerade ball surrounded by his guests — without anyone seeing what happened? What has an actress dead for twenty years to do with the murder of someone who shouldn’t even have been in the current cast?

Urged on by cryptic messages from a local Cunning Woman and supported by his extended household and the street-children of the city, Foxe is soon entangled in webs of secrecy and deceit going back into the past and outwards as far as London itself.

“Bad Blood Will Out” is Book 4 of the Ashmole Foxe mystery series. Like the rest, it’s set in the fascinating world of 1760s England. The story shows how betrayal, greed, ambition and grief lead to a toxic mix of thwarted passions, grim obsession and slow-burning hatred. Before the end, it’s going to bring Foxe face-to-face with the most callous, cold-hearted and remorseless killer he has ever known. 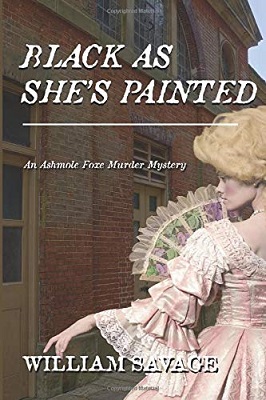 Samuel Melanus, a rich goldsmith turned banker goes missing, and his promiscuous wife is found naked and strangled on her own bed. It’s yet another case for Georgian Norwich’s most cunning and unconventional crime-solver, the bookseller Mr Ashmole Foxe.

Foxe is approached by representatives of the city’s mercantile elite to find the missing banker before his disappearance causes a financial panic. Then, right at the start, news comes that the man’s wife has been found murdered. Thus begins a tale of intrigue, deceit and hatred, involving one of Foxe’s most loathed enemies. Aided by a motley cast of street children, a beautiful teenage burglar, and several incompetent constables, Foxe must resort to breaking the law himself to bring the murderer to justice — and work out how thousands of pounds have been stolen from one of Norwich’s leading banks, without them noticing anything was missing.

With the return of Captain Brock from his Grand Tour, Foxe’s growing acceptance by the city’s elite, and wise advice from Mistress Tabby, the Cunning Woman, our hero’s life might be set fair for once — if only he wasn’t quite so willing to become involved with the low life of Norwich in his search for the truth about the missing banker and his wife, Eleanor Melanus. Was she really as black as she was painted? Or was it simply her ill fortune to be both desirable and not too bright — a woman alternately used and betrayed by the men around her? Either way, Foxe must face down a pitiless criminal enterprise to discover what really went on in the Melanus household … and in the bank next door. 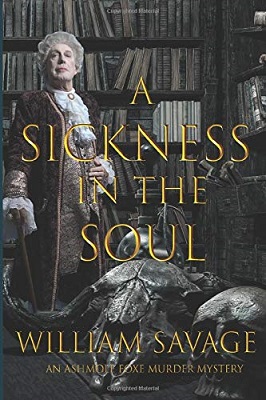 A Sickness in the Soul
Book Six

“Many people wear masks. Some to hide their feelings; some to conceal their identity; and some to hide that most hideous plague of mankind: a sickness in the soul.”Ashmole Foxe, Norwich bookseller, man-about-town and solver of mysteries will encounter all of these in this tangled drama of hatred, obsession and redemption. This is a story set in the England of the 1760s, a time of rigid class distinctions, where the rich idle their days away in magnificent mansions, while hungry children beg, steal and prostitute themselves on the streets.

An era on the cusp of revolution in America and France; a land where outward wealth and display hide simmering political and social tensions; a country which had faced intermittent war for the past fifty years and would need to survive a series of world-wide conflicts in the fifty years ahead.

Faced with no less than three murders, occurring from the aristocracy to the seeming senseless professional assassination of a homeless vagrant, Ashmole Foxe must call on all his skill and intelligence to uncover the sickness which is appears to be infecting his city’s very soul. Can Foxe uncover the truth which lies behind a series of baffling deaths, from an aristocrat attending a ball to a vagrant murdered where he slept in a filthy back-alley?