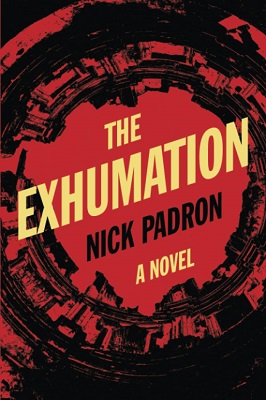 The things we do for others that we would never do for ourselves … love and death in a world at war.

It’s 1937 and besieged Madrid lies in near ruins, its people struggling under nightly bombardments. Into this uncertain world, enter three Americans assigned with the task to find and exhume the remains of Robert Jordan—a member of the International Brigade killed in action—and bring him home for proper burial in the States. They are Jordan’s uncle and the two-man team hired for the job: the amoral but winsome Major Williamson and their interpreter, John, who tells us the story.

Set over the course of three days, amid vivid depictions of wartime Madrid, we follow the team through the violent drama that surrounds Robert Jordan’s exhumation, the human cost of the undertaking, and John’s and Maripaz’s, the beautiful piano teacher he meets during an artillery attack, fateful escape from Spain. More than a wartime tale of suspense set in a crumbling world, The Exhumation is a story about the meaning of loyalty, of love and loss, and finally, the unending search for a lasting ideal.

As I started to read The Exhumation I was reminded of Ernest Hemingway’s For Whom the Bell Tolls which I read as a teenager many decades ago. It was therefore no surprise to me that on his Amazon page Nick Padron describes his book as a continuation of that great novel.

Like Hemingway, Padron explores the frustrations and brutality of the Spanish Civil War where the death toll included more executed civilians than fighters killed in action. In common with most civil wars, loyalties pitched relatives and former friends against one another; neutrality was nigh on impossible. As the war escalated the two sides were assisted militarily by like-minded countries; principally Germany and Italy on the Nationalist side, Russia and Mexico on the Republican side. Although many countries pledged non-intervention, many of their young people travelled to Spain to fight alongside their respective like-minded Spaniards. On the Republican side many were organised into the International Brigades.

Hemingway’s protagonist, Robert Jordan, was an American who lost his life fighting for an International Brigade and Padron’s plot involves an attempt to recover his body and return it to his wealthy US family. The three man recovery team consists of an elderly uncle who is supported by Major Williamson and our protagonist, “John”. We are given limited information about all three but it is clear that the Major and John have been involved in previous clandestine adventures. Although John is supposedly the interpreter we learn that he has other skills and that he can be brutal when required. We are also given some fascinating insights into his background but even so, at the end of the book I felt there was still much that I didn’t know about him.

The story is told in the first person from John’s perspective. The text and the story flow well, keeping the reader interested. John’s role as interpreter gives some lighter moments as he struggles with the regional variations in the Spanish language. Like Hemingway he uses formal English to reflect the differences.

The plot is principally an adventure with some intrigue, violence, a lot of tense movement through hostile areas and the romance between John and Maripaz who found love at such an inconvenient time.

I can see that Padron has previously published a number of books and short stories, alongside a musical career. Writing sequels to successful novels can sometimes be viewed as opportunistic in that to some extent the characters and settings have already been created but even so, I consider that The Exhumation is well worth a read.

Author, composer Nick Padron grew up in New York City and resides in Miami FL. and in Madrid, Spain. His stories have appeared in numerous literary magazines and anthologies, including Ploughshares, Zoetrope: All Stories, Pank Magazine, in the U.S. and abroad.

His first fiction collection, Souls in Exile published by Adelaide Books, N.Y. is now available. He is the author of three novels, including Gabriel Hemingway’s The Cuban Scar, and his latest works, The Exhumation, and Where Labyrinths End, scheduled for publication Dec. 2021