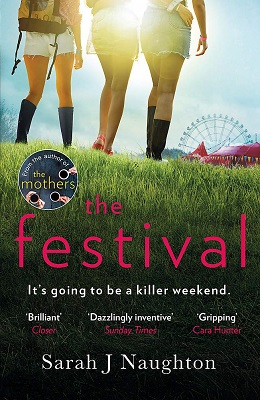 Orly, Lenny, Mel and Thea have been best friends since school. But now it is 20 years later and inevitably they have drifted apart.

It is Lenny’s 40th birthday, plus Orly and Mel need cheering up, so Thea suggests a weekend away at a festival in their hometown. It’s a chance for them all to reconnect.

NOT ALL OF THEM WILL SURVIVE.

But their holiday soon takes a sinister turn, and not all of the friends will leave the festival alive…

The Festival is a gripping read about four women who have been friends since they were at school. We meet Orly at the wake after her husband’s funeral. She is a broken woman who has had to nurse her sick husband for so long and is now alone.

At the wake are her friends Mel, whose teenage son is getting ready to head to university and she is suffering from empty nest syndrome. Lenny, a high-flying businesswoman and a single mother to twins. Thea, whose life is complicated. She is a mother of two children, one who has mental health issues and attends a private special school paid for by her rich boyfriend Bruno, who seems to be losing interest in her.

With Lenny’s fortieth birthday coming up she decides it would be a good idea for the four of them to get away from it all for the weekend and let their hair down at the Gillfest Festival, but with a chance meeting with a man called Trey on the journey there and him leaving his case on the train, the story takes a deadly turn as Trey may have just left his case on the train on purpose for the women to find, plus an old friend of the women with an axe to grind has said she will see them there and the past and the present come colliding. One thing is for certain, four women will enter the festival but not all of them will be returning home!

The plot is told from the four women’s point of view and is very twisty and complicated at times. The first part of the book is an introduction to each of the women and how their lives have turned out, none were as they predicted when they were teenagers. The second part is the four women at the festival as they try to recapture their youth, but also try to understand how their lives turned out different from how they thought they would, as well as them having to deal with threats from someone on the site.

The pace ebbed and flowed, one minute it felt like it was going at warp speed the next it was like travelling at a snail’s pace. This worked for this book as the pace chanced with each point of view change and so it felt like it complimented the women’s personalities.

I was intrigued by the plot, especially with it being set at a festival which is described perfectly. The story felt fresh and completely up to date, especially with the Twitter posts dotted throughout. It was enjoyable, tense, and had me glued to the pages wanting to know who wasn’t going to make it home again, the answer was more shocking than I expected!

Sarah worked as an advertising copywriter for ten years before her first book was published in 2013. A supernatural thriller for teens, The Hanged Man Rises was shortlisted for the Costa Book Awards and a second thriller for teens, The Blood List came out the following year. She also writes psychological thrillers for adults. Tattletale was followed by Amazon bestsellers, The Other Couple, and The Mothers (The Sunday Times Crime Book of the Month). The Festival is out in 2021.

Sarah lives in London with her husband and two sons. 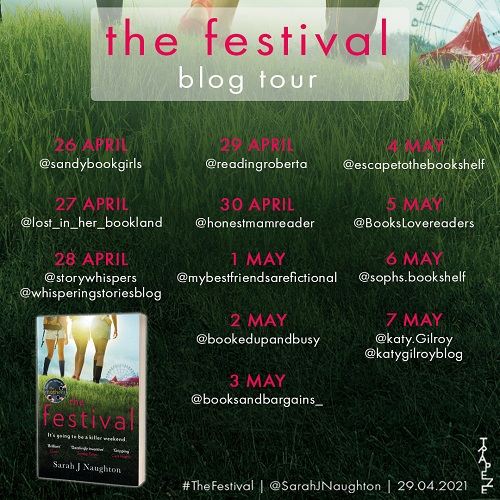