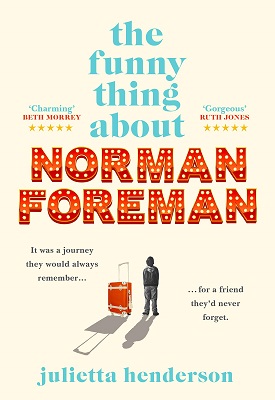 The Funny Thing about Norman Foreman

It was a journey they would always remember . . . for a friend they’d never forget.

Norman and Jax are a legendary comedic duo in waiting, with a five-year plan to perform at the Edinburgh Fringe by the time they’re fifteen. But when Jax dies before they turn twelve, Norman decides a tribute act for his best friend just can’t wait, so he rewrites their plan:

Sadie knows she won’t win Mother of the Year and she’s not proud she doesn’t know who her son’s father is. But when she finds Norman’s list, all she wants is to see her son smile again… So they set off on a pilgrimage to Edinburgh, making a few stops to find Norman’s dad along the way.

Norman Foreman had never had a friend until Jax Fenton came into his life. The two were inseparable, more like brothers than best friends. They wanted to be comedians, a double act and as such they wrote a five-year plan at ten years old which included performing at the Edinburgh Fringe by the time they were fifteen.

Sadly at just twelve years old, Jax died. Struggling with his grief having lost his one and only friend and the person he thought he would have by his side forever, Norman comes up with a new plan, which includes finding the dad he has never met and performing solo at the Edinburgh Fringe, this year, as a tribute to Jax.

With help from his mum’s work colleague Leonard, the trio set out on the road heading north to Edinburgh, stopping along the way at the places where the possible men who could be Norman’s dad are located.

The Funny Thing about Norman Foreman is a beautiful, heartfelt and quite often amusing story told from the viewpoints of Norman and his mum Sadie. The author has handled the death of a child with sensitivity and whilst you might be thinking I can’t read a book about a child dying, the way that it has been written never once had me reaching for the tissues, it was more the light that Jax brought into Norman’s life and Norman handles his death incredibly well. Missing his friend but also wanting to do something for him.

Sadie is a lovely woman who has brought Norman up alone and doubts her mothering skills constantly. She feels that she has failed at being his mother and yet she is actually quite the woman who would and has done anything for her son.

Norman is a wise lad, he is articulate, always tries to look for the good in a situation, and is so brave. How many twelve-year-olds do you know who would have the confidence to want to stand in front of a huge crowd and perform a comedy tribute? He is so loving and caring and tries to protect his mum from how he is really feeling about Jax.

Pensioner Leonard is a military veteran and a whizz at planning. He worked as the cleaner at the company where Sadie works and the two became firm friends. He has a wicked sense of humour and is not afraid to show his boss the ‘birdie’ when he is being ageist.

The Funny Thing about Norman Foreman is a truly incredible book. It made me smile and affirmed my feelings that you need to live in the now, not hang onto the past. This is a story of the power of friendship, love, and family. It takes you on a journey and has you feeling all warm and fuzzy inside. I read it in just a couple of sittings as I couldn’t put it down.

Julietta Henderson grew up in the rainforests of North Queensland, and developed her passion for the written word producing ‘magazines’ for school friends and neighbours with her sister. She has worked her way through jobs as diverse as bicycle tour guide in Tuscany, nanny in the Italian Alps and breakfast waitress in the wilds of Scotland. Like many Australians, her love affair with Europe began when she came to London and stayed for more than a decade.

Now a full-time writer, Julietta divides her life between Melbourne, the UK and wherever else she can find winter.

What did you think of ‘The Funny Thing about Norman Foreman’? Share your thoughts in the comment section below!