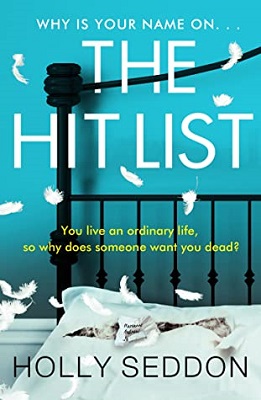 On the anniversary of her husband’s accidental death, Marianne seeks comfort in everything Greg left behind. She wears his shirt and cologne, reads their love letters and emails. Soon she’s following his footsteps across the web, but her desperation to cling to any trace of him leads her to the dark web. And a hit list with her name on it.

To try to save herself from Sam, the assassin hired to kill her, Marianne must first unpick the wicked web in which Greg became tangled. Was Greg trying to protect her or did he want her dead?

A year after the death of her husband, Marianne is wanting to be close to him. Wearing his clothes and looking through his possessions and computer. She notices something she hadn’t before and when she clicks on it she is taken to the dark web. After following her husband’s trail she locates a site for assassins that has been hacked and people can search to see if their name is on the list.

Curious about her husbands dealing on the dark web, she wonders if his death wasn’t just an accident and inputs his name but nothing comes up. Jokingly and to prove to herself that the site isn’t real she inputs her own name and astonishingly she discovers that there is a hit out on her.

The hit list is split into three sections. Now, Before, and Now. There are no chapters but the points of view alternate between Marianne and the assassin, Sam. It was unusual to hear so much from the assassin, as to who they have already killed, why they are doing it, their tactics, and even their family. In the beginning, they are just someone who has been given the task of killing another. By the end, you are sympathetic to their plight and understand why they are doing such a horrid job.

Marianne for me felt both naïve and brave. She was a high school teacher and even after discovering her name on the list and realising that the list was real and that others before her name were already dead she decided to stay at her home and go to work as normal, whilst trying to dig some more into why she was on the list in her spare time. I mean could you imagine just carrying on as normal knowing someone is trying to kill you?

I had to get used to the way the book was written in the beginning with there being no chapters but after I’d say 20% of the way in I never really gave it much thought.

The plot took me to places I never expected. I had my mindset that the book was going to go in one direction but then it took a twist and my guesses were blown away by the real reason Marianne was on the hit list.

The book is gripping and I raced through it, reading it in just one day. Holly Seddon is a wonderful storyteller and obviously has one hell of an imagination to create such an engaging, yet scarily realistic novel.

Holly Seddon is the international bestselling author of TRY NOT TO BREATHE, DON’T CLOSE YOUR EYES and LOVE WILL TEAR US APART.

After growing up in the English countryside obsessed with music and books, Holly worked in London as a journalist and editor. She now lives in Amsterdam with her family and writes full time.