The Kindness of Strangers by Roxana Valea – Guest Post

The Kindness of Strangers by Roxana Valea – Guest Post

Today on the blog we welcome author Roxana Valea, with her guest post ‘The Kindness of Strangers‘, as part of the one day blitz for her book, ‘Through Dust and Dreams: The Story of an African Adventure’. This post contains affiliate links.

Roxana Valea was born in Romania and lived in Italy, Switzerland, England and Argentina before settling in Spain. She has a BA in journalism and an MBA degree. She spent more than twenty years in the business world as an entrepreneur, manager and management consultant working for top companies like Apple, eBay, and Sony. She is also a Reiki Master and shamanic energy medicine practitioner.

As an author, Roxana writes books inspired by real events. Her memoir Through Dust and Dreams is a faithful account of a trip she took at the age of twenty-eight across Africa by car in the company of two strangers she met over the internet. Her following book, Personal Power: Mindfulness Techniques for the Corporate World is a nonfiction book filled with personal anecdotes from her consulting years. The Polo Diaries series is inspired by her experiences as a female polo player—traveling to Argentina, falling in love, and surviving the highs and lows of this dangerous sport.

Roxana lives with her husband between England and Spain, and splits her time between writing, coaching and therapy work, but her first passion remains writing.

The Kindness of Strangers

Africa showed me a level of kindness that I have never encountered in Europe.

I have been welcomed into the humble huts of locals who shared their meals with me. Once I thought one hut was a restaurant and I casually took a seat at a table in front it with one of my travel mates and we asked for food. They brought out everything they had in the house and laid it on the table in front of us and when we asked for the bill they explained that we had been their guests because this was their home. I never felt more embarrassed in my whole life!

Another time, about twenty locals came out of a minibus and lined up behind my travel mates and I to show support for us as a policeman was keeping our passports and giving us a hard time. Seeing all the locals lined up behind us speeded up considerably the resolution of the issue.

In Chad, one of the most difficult countries to travel to in Central Africa, we arrived in a small town fresh after an attempted attack on our car. We were scared, lost and felt extremely vulnerable. The memory of the attack was fresh and we were desperate for safety. We asked some people on the street who was the most powerful person in town. They pointed to a large compound and said “the governor”. We then knocked at the gates of the compound, and told the guards we wanted to speak with the governor.

Did we know him? They asked.
No we didn’t.
What did we want from him?
Protection. We answered.

The incredible happened and the governor came out to the gates to speak to us and hearing that we are three travellers in a car who were too scared to camp outside, he invited us to camp in his garden under the protection of his guards.

And all this just because we had knocked at this door.

Another time we were taken from the streets of Luanda, the capital of Angola by a woman in her car just because she had passed by, seen us surrounded by a large crowd and decided that two travellers lost in that suburb don’t understand the danger they‘re exposed to.

She stopped the car and said: “Get in!”
“Why?” we asked.
“There’s no time for explanation. Just get in.” she insisted.
We did. She started driving and told us that we had no idea the danger we were in.

And the list is countless. People prayed for us then we told them we were going South, crossing Africa. People fed us and offered us directions and help. They welcomed us in their houses and in their hearts.

Africa showed me more kindness that I ever thought possible, a level of deep human kindness that we have sometimes forgotten in Europe. Africa showed me that it isn’t us, Europeans, who have something to teach them, Africans, but it’s them who remind us of our core humanity. The kindness of Africa is a lesson I will never forget and I can only hope that some of the scenes of my travel journal have managed to depict the beauty of these magical encounters. 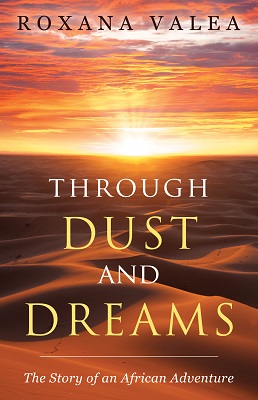 At a crossroads in her life, Roxana decides to take a ten-day safari trip to Africa. In Namibia, she meets a local guide who talks about “the courage to become who you are” and tells her that “the world belongs to those who dream”. Her holiday over, Roxana still carries the spell of his words within her soul. Six months later she quits her job and searches for a way to fulfil an old dream: crossing Africa from north to south. Teaming up with Richard and Peter, two total strangers she meets over the Internet, Roxana starts a journey that will take her and her companions from Morocco to Namibia, crossing deserts and war-torn countries and surviving threats from corrupt officials and tensions within their own group.

Through Dust and Dreams is the story of their journey: a story of courage and friendship, of daring to ask questions and search for answers, and of self-discovery on a long, dusty road south.