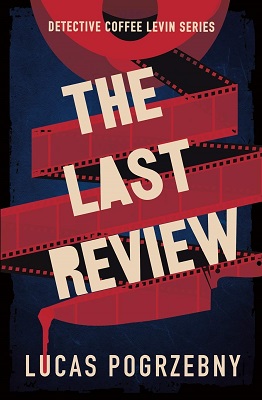 His last job as a film critic. His first case as a detective.

Coffee addict Polo Levington is trapped. A favor to an old magazine employer takes him back to his hometown—a place he promised never to return to—and into the set of “The Last Farewell”. With two aging stars returning to the spotlight after a past fatal tragedy, this soon becomes a film like no other. The conflicts and disputes are quick in coming—movie egos in their purest form, harmless, amidst the props and make-up…

Until someone in the cast falls dead for real, that is.

The behind-the-scenes exclusive soon turns into a crime scene investigation and Polo Levington into an unwitting lead. He has a natural talent to notice all kinds of details others can’t. He knows that the murderous intent still plagues the fragile production, and that the deadly curtain has only risen. But he’s led his life running away from a childhood trauma—away from that deep red world of suspicions, deceit, and death. Could this be the moment for him to finally face his fears and take the center stage?

But who’s lying? Who can he trust? Every wrong decision brings him closer to his own ghosts… and closer to a clever murderer, determined to leave the truth dying on the editing room floor. No matter who gets cut off.

Polo Levington is the son of a famous detective with an eidetic memory, a traumatic past, and an obsession with coffee. He’s also a writer with an assignment he doesn’t want. The job takes him to a film studio in Buenos Aires to observe a day’s shooting for a new feature, The Last Farewell. After that, he’s to interview the film’s female lead, Virginia Sinclaire, and write an article for Cine Azur magazine.

But The Last Farewell is a star-crossed production. First, the pompous leading man, Victor Dumas, stabs an actor during a take. The knife is a stage prop, but the actor’s wounds are real enough. Then Ms. Sinclaire keels over dead in front of the camera. And if that weren’t enough, Polo finds Dumas’s body in the studio, an apparent suicide.

The police conclude Dumas is responsible for all three incidents, but that explanation doesn’t satisfy Polo. Encouraged by a young actress Clara Bourque, he reluctantly assumes the role of detective and vows to determine the “real truth.” He soon realizes there is a connection between these two deaths and another one that occurred in a film studio twenty years earlier. Polo battles against his personal demons and the killer to avoid becoming the next victim and solve the case.

The Last Review isn’t always a smooth read. For the first several chapters, the action stays stuck in the film studio. As I progressed through the book, I found, the writer’s over-fondness for similes becomes increasingly distracting. I also thought the concluding chapter was unnecessarily long and didn’t have much significance.

Given the South American setting, I expected the story to prominently feature Buenos Aries. But other than an occasional mention of a street or a district, it could occur in any generic city.

Even with these imperfections, I ended up liking the book. The pace does pick up as the story unfolds, ultimately piquing the reader’s interest. Clues along the way gradually explain the connection between the present and the past, but don’t give away anything until the end. In the denouement, Polo channels Hercule Poirot in Murder on the Orient Express, yet the déjà vu that scene evokes is more comforting than troubling. The storyline is solid enough to keep the reader invested until the the final page.

Lucas Pogrzebny (also published under Lucas Porzebny) began writing during his childhood, after discovering detective novels and getting a short story published in an interschool anthology. In his teens, however, he leaned towards acting, taking theater classes for more than a decade, and then pursuing studies in filmmaking and graduating as a director. He worked for several years as a sound and lighting designer, and as an assistant director and actor. He also ventured into advertising as an actor and model. In parallel to all this acting-audiovisual journey, he resumed his passion for literature, and studied dramaturgy, crime novel, horror scriptwriting, and literary structure. He is also about to earn a diploma in criminology and criminalistics.

Lucas is a great admirer of the Golden Age of Detective Fiction, of the classic crime novels and murder mysteries, and a film buff who loves American film noir, Korean cinema, Japanese horror, and Italian giallo.

In his spare time, he enjoys playing the guitar (a black vintage Strat) and spending time with his family. His hobbies include swimming, going to the movies, and reading. Oh, and he loves to drink coffee.

He lives in Buenos Aires, Argentina, where he was born in August 1988.

He has been Longlisted in the Crime Writers’ Association Margery Allingham Short Mystery Competition.