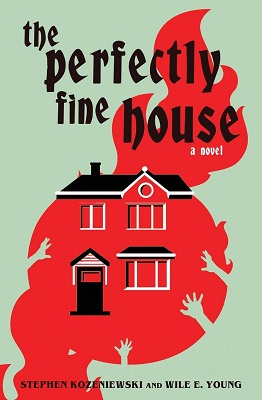 In an alternate reality where ghosts are as commonplace as the weather, the most terrifying thing imaginable is a house not being haunted.

Donna Fitzpatrick runs a surrogacy agency, where ghosts can briefly possess volunteers in order to enjoy carnal pleasures. She’s also working herself into an early grave. But that’s no big deal because death is no worse than puberty. That’s particularly evident in Donna’s twin, Kyle, a self-absorbed roustabout who spends most of his time high on sage. Kyle’s been in arrested development since his motorcycle accident fifteen years ago.

When Donna has a panic attack, Kyle insists she take a vacation at an abandoned mansion. There’s just one small problem: there isn’t a single ghost in Jackson Manor. And while an unhaunted house seems no worse than an oddity at first, soon ghosts go missing, natural disasters consume entire cities, and every afterlife on earth is threatened by the terrible secret behind . . .

This book was nothing like I expected, I was imagining a spooky book full of hauntings and small scale mysteries rather than an incredibly thought provoking and sneakily poignant read about the relationships people have with the dead.

The main characters are written in a down to earth style, affected by such things as boredom, cowardice and dodgy digestive tracts. Rather than being grand heroes, they’re regular people doing what they can in exceptional circumstances.

The concept of haunting is that almost everybody has a sixth (ghost) sense so it’s just accepted that the souls of the dearly departed are hanging around. The ghosts of great grandparents take care of the childcare and life is treated as pointless, knowing that everyone has an eternity ahead of them without the petty restrictions of needing to eat and sleep.

The mystery begins when Donna goes for a weekend stay at a house that has no ghosts; unheard of. The phenomenon grows and starts devouring ghosts, which leads to the dead having to quickly come to terms with the idea of finality to their afterlife.

For me, this was the point of the story rather than the discovery and explanation of the de-ghostifying phenomenon – considering the value of life and unlife when there’s no guarantee of forever.

As a fan of Stephen Kozeniewski (his horror books are all bizarre, original and amazing), there was no way I was going to overlook this book and I’m gutted it took me so long to get round to reading it! Based on this story, I’m going to be looking into the work of his co-author Wile E. Young and expanding my horror collection even further.

Stephen Kozeniewski lives in Pennsylvania, the birthplace of the modern zombie. During his time as a Field Artillery officer he served for three years in Oklahoma and one in Iraq, where, due to what he assumes was a clerical error, he was awarded the Bronze Star. He is also a classically trained linguist, which sounds much more impressive than saying his bachelor’s is in German.

What did you think of The Perfectly Fine House? Share your thoughts in the comment section below!