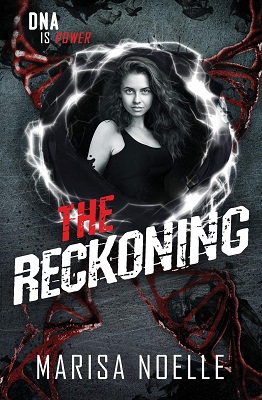 The Reckoning
The Unadjusteds Book Three

THE FIGHT IS NOT OVER.

A NEW NEMESIS HAS AWOKEN.

Sinister visions of an evil entity with looming yellow eyes haunt Silver’s dreams, threatening to destroy the new world she and her friends have created. The terrifying omens push Silver to experiment with her abilities, but awaken a burgeoning thirst for more power.

As Silver walks a fine line between good and evil, her friends become wary of her intimidating abilities. She finds understanding in a sympathetic newcomer, but their deepening friendship drives an even deeper wedge between Silver and her suspicious friends.

Tragedy strikes during preparations for the final stand, bringing a terrible choice. Grief drives Silver toward reckless actions that may doom the final battle. Can she repair the relationships with her friends and control her powers before her vision becomes reality?

‘The Reckoning’ is the third book in the Altereds series by British-based author, Marisa Noelle. Silver Melody returns for the next chapter in this story of the planet’s struggle to rejuvenate itself. President Bear’s reign of terror has come to an end, the evil Earl has been neutralised on his mountain and Silver’s mother has been rescued.

There are fewer than three million survivors of the virus and Silver knows she has to play a large part in the successful rejuvenation of the planet in the absence of her father. The crops start to fail and Silver is wracked with anxiety. In addition, she is preoccupied with trying to coax her mother from her catatonic state and is plagued by haunting dreams; she hopes they’re nightmares but what if they’re premonitions?

Told in the present tense, we often see the action from the perspective of Silver in the first person. We also spend time with Eli, a survivor of Earl’s experiments, who struggles to fit in with his peers.

There are fewer action scenes in the first part of this story with more emphasis on soul-searching and moral panics, so the pace is arguably a little stodgy in places. We reconnect with many of the characters from the first two books and I suggest readers start at the beginning of the series to fully appreciate how the plot has developed.

As with many dystopian ideas, a pivotal aspect of the earlier stories is the presence of a virus unleashed onto an unsuspecting world. Inevitably this still plays a part with mutations, vaccines and antibodies all being mentioned. These nouns have become all too familiar over the last year and this may be a little too close to home for some readers.

The author makes very good use of foreshadowing as the momentum builds and the climax beckons. I was reminded of the march of the dead army in Game of Thrones and was intrigued to see how Silver et al would succeed in spite of overwhelming odds against this existential new threat. I was fully engaged with this struggle but confess to feeling a little deflated by the ending.

Whilst it’s always difficult to maintain momentum across several books, readers who have enjoyed the previous Altereds stories will no doubt appreciate this conclusion to the saga. I award four stars.

MARISA NOELLE is a writer of young adult and middle grade novels. She leans towards grounded science-fiction, urban fantasy and paranormal but mental health issues are important to her writing too. Published books include: The Shadow Keepers, The Unadjusteds, and The Mermaid Chronicles – Secrets of the Deep. You can find out more about them in the books section.

Growing up, Marisa had plenty of ideas for career and still regrets not moving to Hawaii to train dolphins and pretend the real world didn’t exist. Struggling with anxiety and anorexia lead her to the field of psychology. Heavily influenced by underdog movies such as The Karate Kid she realised her mission in life was to help other people, through any medium. Embarking on a psychology degree, she wanted to emulate her hero, Jodie Foster, from Silence of the Lambs and actually tried to secure work experience at Broadmoor. Thankfully she left the idea of criminal profiling behind, but uses many of these aspects in her novels.