The Tale of a Toothbrush by M. G. Leonard – Book Review

The Tale of a Toothbrush by M. G. Leonard – Book Review 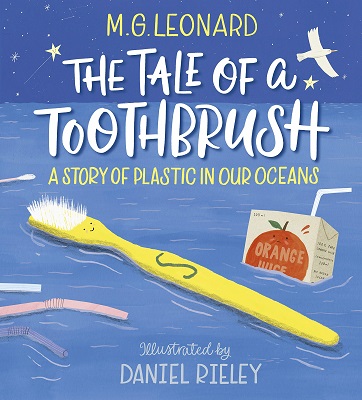 Children use their toothbrush each morning and evening, and get new ones every few months. That’s billions of toothbrushes! What happens to them all when they’re no longer needed? And if toothbrushes take thousands of years to break down, what does that mean for our planet?

With a fun cast of plastic characters, from pirate-ship bottles to dancing shampoos, and even an inquisitive albatross, The Tale of a Toothbrush is a positive and heart-warming story to help children explore the impact their choices have on our planet.

Little Sofia has her first toothbrush which she calls Sammy and puts a big S on it. A few months later her mum noticed that the bristles are starting to fray and that Sofia could do with a new brush and so she throws Sammy away. Sofia isn’t happy but Sammy goes on a journey across the world where he meets lots of other rubbish.

He missed Sofia so much that he then tries to find his way home again.

I am normally a big fan of books that spread the message about plastics and how harmful single-use plastic is for the world and so I had high hopes for this book. However, this is more a story of a toothbrush being thrown away, feeling sad, and wanting to return home. I don’t think the message in the book was powerful enough to convey the information on harmful plastics and alternatives, certainly not without a grown-up explaining things to the child reader.

There is a factual information page at the back of the book and the mention of using a bamboo brush instead of a plastic one which was useful, there were also some suggestions on what a used toothbrush could be reused for once it was no longer any good for your teeth, but there are only so many toothbrushes you need to brush a doll’s hair, or clean your boots with, etc. I had thought this was going to be a book showing exactly what happens to the toothbrush and explaining every step and it being left for many, many years in a landfill.

The illustrations were pleasant to look at being bright, colourful, and full-page, though Sofia looks like an old lady to me rather than a young girl.

Overall, if you are after a lovely story about a toothbrush finding its own way back to its original owner then this is a nice tale. If you want a book about plastic waste to share with your child/class then I think this misses the mark.

M. G. Leonard is an award-winning, bestselling, writer of children’s books. Her books have been translated into over forty languages and a TV series based on the Beetle Boy trilogy is currently in development. She is a vice president for charity Buglife and her beetles have appeared on Blue Peter, Springwatch Unsprung, Countryfile, Meet the Author with James Naughtie, Sky News, and featured in the BBC documentary, The Bug Couple.

Maya spent her early career in the music industry running Setanta Records, an independent record label and managing bands, most notably The Divine Comedy. After leaving the music industry, she trained as an actor, dabbling in directing and producing as well as performing, before becoming a digital producer for Shakespeare’s Globe, the Royal Opera House, the National Theatre and Harry Potter West End.

She is one of the founding authors of #Authors4Oceans, with Lauren St John, campaigning to reduce single-use plastics.

What did you think of The Tale of a Toothbrush? Share your thoughts in the comment section below!