The Wait for Shadows by Karl Holton – Book Review

The Wait for Shadows by Karl Holton – Book Review 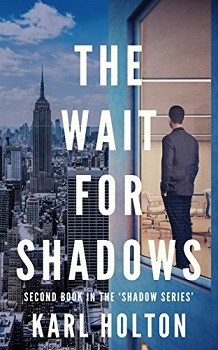 The last six days in ‘The Weight of Shadows’ were just the beginning. Danny Benedict and the whole team must get ready — it’s day seven. The second book in the ‘Shadows Series’. Every morning you can watch the sunbeams glitter, certain you no longer need to wait for shadows.

The Wait for Shadows is the second of Karl Holton’s Shadows trilogy, following The Weight of Shadows and preceding The Water’s Shadow which was published earlier this year.

In my review of The Weight of Shadows I commented that Holton does not deal in half measures and he has kept that tradition in this work. Once again we have a non-stop plot with plenty of action that spreads from local drug gang rivalry to international money laundering and fine art theft; all investigated by a multi-agency team. The desire to keep the pages turning is fuelled by the cliff hanger endings to each short chapter; all seventy two of them!

As with the first book, Holton has used a large cast of characters, some of whom were featured in The Weight of Shadows. To help us fathom out who’s who he has provided a list of the main characters at the beginning. It helps a little, although it is easier to refer back in a hard copy than an eBook. One problem with so many characters and so much action is that we do not get much of an insight into any of them beyond their direct involvement in the plots.

Holton skilfully kept me confused as to how the various plots and characters would come together. All was eventually made clear but only after some well written and tense final chapters.

In the opening notes of each book Karl Holton points out that there is a secret book code that tells us something we don’t yet know. I think this is what could be called foreshadowing. Whatever it is called I’m not sure that I spotted the code, let alone worked it out. Hopefully you will understand his meaning.

If you like a crime thriller that will keep your attention throughout then try The Wait for Shadows. I have awarded four stars.

Karl previously worked in financial markets for over thirty years, before deciding that he had to write. He couldn’t leave this dream any longer.

He lives in the United Kingdom with his wife and two children.

What did you think of The Wait for Shadows? Share your thoughts in the comment section below!