The Wilderness Between Us by Penny Haw – Book Review

The Wilderness Between Us by Penny Haw – Book Review 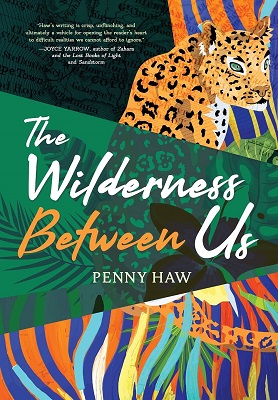 The Wilderness Between Us

Faye Mackenzie and her friends’ anorexic daughter, Clare, are thrown together when a flood separates them from their hiking group in the remote, mountainous Tsitsikamma region of South Africa. With Clare critically injured, Faye is compelled to overcome her self-doubt and fear of the wild to take care of the younger woman, who opens her heart to Faye.

As their new friendship takes the women on an unexpected journey of discovery, the rest of the group wrestles with the harrowing aftermath of their own near tragedy. When the hiking party is reunited, their number is reduced by one.

Juxtaposing physical and psychological suspense, The Wilderness Between Us is a tale of two fragile women who unexpectedly find clarity, independence, and renewed purpose as they fight to survive. It is a vivid, moving story about family, friendship, adventure, and the healing power of nature and compassion.

The luxuriant South African bush with its exotic plants and animals, and eight friends on a hike through the mountains. What could go wrong? Quite a bit, it turns out. From floods to life-threatening injuries, the hikers encounter much more than they planned.

Twenty-something Clare Bosson is a last-minute substitute for her mother, who couldn’t make the trip. She is struggling with anorexia, trying to pull herself out of the illness by exerting tighter than ever control over herself. As the group prepares to set off on the second day’s hike, Clare comes down with a severe migraine and can’t go along. She waits behind, intending to hitch a ride with the rangers when they move the group’s supplies to the next campsite. Worried about the girl being alone, Faye Mackenzie stays with her. Faye is a timid woman who is often the butt of her husband Derek’s jokes. Years of this have drained her self-confidence.

The second day of hiking was a disaster. The main group of hikers finds the Bloukrans River swollen by unseasonable heavy rains. One of them nearly drowns and Derek injures his back saving her. Clare and Faye are in better shape, until, that is, Clare takes off on a long hike alone and severely injures herself in a fall. Faye finds herself responsible for the young woman, who is too hurt to move. After years of Derek’s gaslighting, will she be able to find the strength and confidence she needs to survive in the bush and get help for Clare’s life-threatening injuries?

The Wilderness Between Us is a story of personal growth. Forced together by circumstances, Clare and the older woman develop a bond of friendship like none she’s known before. By the end of the book, each helps the other and herself realize that they’ve been missing much of life has to offer and they make some crucial decisions for their future.

The main story is, of course, the African hike and the tribulations of the hikers. But the writer also uses flashback scenes to explain how the characters got to be the way they are. Readers get insight into Clare’s anorexia, Derek’s bullying behavior, Faye’s descent into self-doubt, and much more. The action moves along but not in such a way that the pace seems rushed.

Like several of the books I’ve reviewed, this one is peppered with foreign words and names. However, the author has helpfully included a glossary at the beginning, and this helps the reader immensely.

Although I was unable to finish it in one sitting, The Wilderness Between Us was difficult to put down. Clare and Faye are likable, sympathetic, and I found myself rooting for them throughout the book. This is one book that I can enthusiastically recommend.

Penny Haw is a Cape Town-based writer. To begin with, of articles and columns for newspapers and magazines. She has written for Business Day, Sunday Times, Financial Mail, Sunday Independent, The Weekender and many others.

Now, she is a writer of books. Her first, NICKO, THE TALE OF A VERVET MONKEY ON AN AFRICAN FARM is a children’s book. It was first published by Penguin Random House South Africa in 2017.

Her first novel for adults, THE WILDERNESS BETWEEN US is a story of family, friendship and adventure. As with all her writing, it expounds Penny’s love for animals and the outdoors. It also explores the effects of gaslighting and anorexia, the associated shame and the healing power of nature and compassion. Penny’s debut historical fiction will be released by Sourcebooks in 2022.

What did you think of ‘The Wilderness Between Us’? Share your thoughts in the comment section below!