The Writing Life of: Karen Heenan

This week I am thrilled to be interviewing author Karen Heenan. Karen Heenan will be sharing with us details of her writing life, telling us all about her latest book ‘Songbird‘, which was released on 2nd November 2019 and answering a few fun questions too. This post contains affiliate links.

Karen Heenan was born and raised in Philadelphia. She fell in love with books and stories before she could read, and has wanted to write for nearly as long. After far too many years in a cubicle, she set herself free to follow her dreams – which include gardening, sewing, traveling and, of course, lots of writing.

Karen Heenan lives in Lansdowne, PA, not far from Philadelphia, with two cats and a very patient husband, and is currently hard at work on her next book.

I wanted to be a ballerina. I just didn’t realize at that age that ballet required more grace and coordination than I could muster up in my entire life. Good thing writer was my second choice.

A pretty broad spectrum, from Noel Streatfeild (Ballet Shoes probably started my ballerina obsession), Maud Hart Lovelace (I still have my childhood Betsy-Tacy books), L.M. Montgomery (it was only a year ago that I passed on my Anne of Green Gables books to a former sewing student).

It occurred to me at a fairly young age that someone had to have written all the books I loved, and there was no reason it couldn’t be me. I started writing at age 9, and never really stopped.

There’s no real average day for me. I try not to stick to a routine or a schedule, because then if something disrupts me, I might not get back to it. I write when, where, and however I can. A large part of my second novel was dictated into my phone while walking around town, and then tidied up later when I got home. My writing space is a corner of what was the dining room, but which now houses all our bookcases, my desk, and a loveseat for reading/writing.

I try to do something writing-related every day, but it doesn’t actually have to be putting words on paper. Thinking about my plot, researching, doing edits, looking for inspiration photos, all qualify as “writing-adjacent” and sometimes that’s enough.

I’m not sure how many I’ve actually written – there were a lot of practice novels over the years, some finished, some not. I’ve had one book published (Songbird, November, 2019), with a second on the way in April, 2021, and another scheduled for the following April. These three, published through Authors4authors, are Tudor historicals. I’m also working on a 1930s historical set in Pennsylvania, which I’ll be self-publishing in later 2021, if all goes according to plan.

A little of each. I get an idea for a story – and it could come from anywhere – and I start writing. Generally I do about 20,000 words before I sit back and try to make a plan. Sometimes those words are keepers, and sometimes they need drastic rewriting, but I don’t consider them wasted because they’re how I get to know my characters.

I also tend to write a first draft more or less straight through (not in order, necessarily, but not stopping to do a lot of research). I leave myself notes in the text about what needs to be researched, and then once I’m done, I search all the highlights and do research to fill in what’s missing. I generally have a good enough idea of the period when I start that I won’t make any serious timeline errors – my notes are more about food, customs, travel, etc. The things that make a story real. 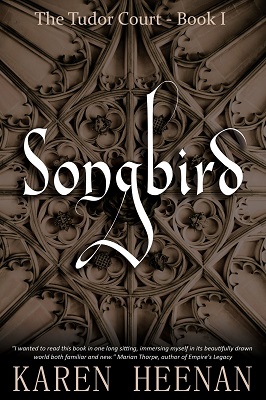 Ten-year-old Bess has the voice of an angel – or so says King Henry VIII when he buys her from her father.

As a member of the royal minstrels, Bess comes of age in the decadent Tudor court, where one false note could send her back to her old life of poverty.

In a world where the stakes are always high, where politics, heartbreak, and disease threaten everyone from the king to the lowliest musician, Bess has one constant: Tom, her first and dearest friend. But when she strains against the restrictions of court life, will she find that constancy has its limits?