The Mermaid, the Witch and the Sea by Maggie Tokuda-Hall – Book Review

The Mermaid, the Witch and the Sea by Maggie Tokuda-Hall – Book Review 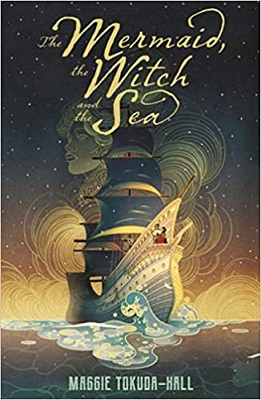 The Mermaid, the Witch and the Sea

In a world divided by colonialism and threaded with magic, a desperate orphan turned pirate and a rebellious imperial lady find a connection on the high seas.

Aboard the pirate ship Dove, Flora the girl takes on the identity of Florian the man to earn the respect and protection of the crew. For Flora, former starving urchin, the brutal life of a pirate is about survival: don’t trust, don’t stick out, and don’t feel. But on this voyage, Flora is drawn to the Lady Evelyn Hasegawa, who is headed to an arranged marriage she dreads. Flora doesn’t expect to be taken under Evelyn’s wing, and Evelyn doesn’t expect to find such a deep bond with the pirate Florian. Neither expects to fall in love.

Soon the unlikely pair set in motion a wild escape that will free a captured mermaid (coveted for her blood) and involve the mysterious Pirate Supreme, an opportunistic witch, double agents, and the all-encompassing Sea herself.

Flora and her brother Alfie are members of a pirate crew aboard the ‘Dove’. To keep her safe and earn the respect of her fellow crewmen Flora takes on the identity of a male and is known as Florian.

The pirate ship is hidden as a passenger vessel taking those with money to their new homes across the sea. One such passenger is Lady Evelyn Hasegawa, who is being sent by her unsympathetic parents to be married off to a man she has never met before.

Florian is given the task of protecting Lady Hasegawa from the other more dubious pirates aboard. As the two spend time together, Florian realised that Evelyn isn’t like the other Imperials, flashing their money about and thinking they are above everyone else. She is a sweet woman who cares and even teaches Florian how to read.

However, once the ship is far out at sea the Captain will give the orders to take the passengers and enslave them all, including Evelyn who Florian has fallen fall. With no alternative, Florian puts together a risky plan to escape taking Evelyn with her and freeing a Mermaid that the crew has caught for her blood. But can they make it to safety when it is not only the pirate crew that is after them?

The Mermaid, the Witch and the Sea is a mesmerising story of love and what it can make you do to protect those that are in danger. The book is written in three parts, ‘The Mermaid’, ‘The Witch’ and ‘The Sea’ and from alternating chapter POV, which for most of the book it alternatives between Florian and Evelyn but later in the book more characters voices are heard.

For me, the strongest and most enjoyable part of the book came at the beginning whilst Florian and Evelyn are aboard the Dove. Their friendship and later their romance was beautiful to watch develop. I was also intrigued to find out about the pirate life and their backstories and whether the would make it together.

Flora/Florian is a young woman who was orphaned and had to do whatever she could, with her brother to survive. She is a murderer who has slit the throats of men to show how loyal and fierce she is, whilst on the inside wishing she could go back to being Flora but living a better life than she and Alfie left.

Lady Evelyn Hasegawa is a noblewoman who doesn’t want to be seen as being noble. She doesn’t want fancy attire or items. She is not like the other dainty noble women she has a voice and wants it to be heard. She is being sent to marry a stranger because she is a disappointment to her family. She is fascinated by Florian and noticed that he isn’t like the other crew members.

This was an intriguing book that made me step out of my comfort zone as I’m not much of a lover of fantasy novels. It captivated me and with a good pace and flow throughout I read it in just two sittings.

Maggie Tokuda-Hall is the author of Also an Octopus, illustrated by Benji Davies. The Mermaid, The Witch, and The Sea is her first novel.

You can read her writing for adults in her column for Catapult Magazine (Fear and Loathing in Utero), and her fiction on The Rumpus, Joyland Magazine, and Columbia Journal for Literature and the Arts.

She lives in Oakland, California with her husband, son, and objectively perfect dog.

What did you think of The Mermaid, the Witch and the Sea? Share your thoughts in the comment section below!